Fill your Boots with this discount trick

Ever wondered how some people find really cheap stuff at Boots? Well, it’s all about stacking deals, putting two or more promotions together. I’ll show you how it works so that you can find your own great bargains, such as the three £53 No7 gift set deals for the price of one.

I’ve been glitch-hunting on the internet for a long time. Along the way, I’ve picked up a lot of tricks. I love being able to trick or manipulate a website into getting you a better deal.

A couple of weeks ago, I found a Boots gift set trick and it was huge in our weekly email. It was a deal where you combined two separate promotions to maximise a saving – £53 No7 gift sets for £50 for THREE. Basically get three sets for less than the price of one. Not bad.

I’m going to show you how I found the gift sets, so you can find similar deals on the Boots website whenever you want. Here’s what you do:
1. Go onto the Boots site, sign in, then click “offers” on the blue tab.

2. You’ll then be able to narrow the result. I usually click “Better than half price offers”, but it doesn’t matter. Play about with the offers to see what you get. 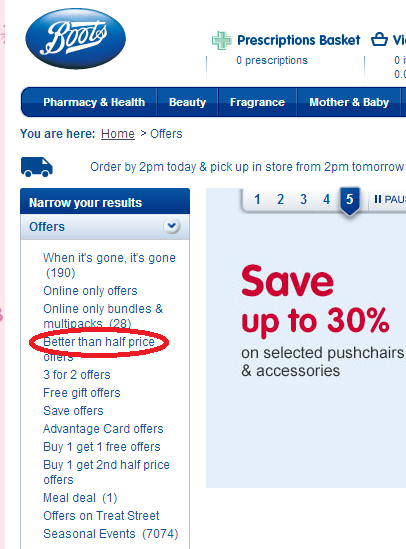 3. You’ll then have a big list of items at a really good price. Click the “By promotion” button again to maximise the discount by adding another promotion option. I like anything 3for2-related. 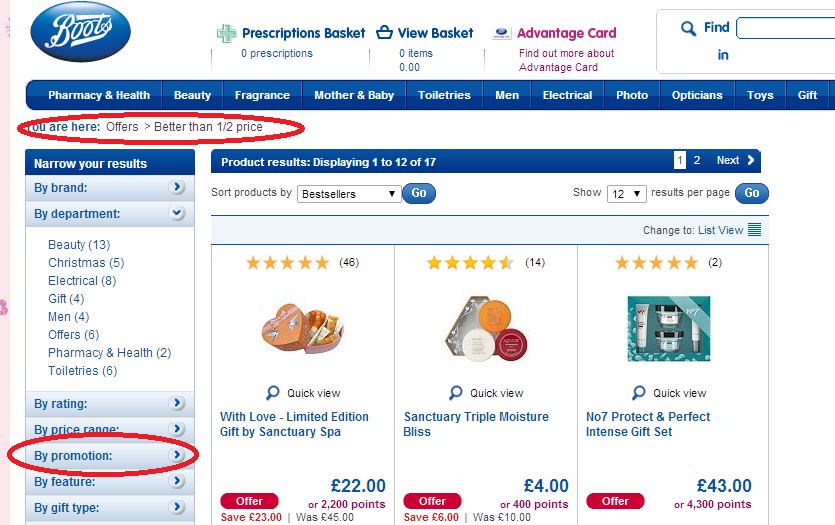 The current 3for2 promotion is No.7 skin care. Remember this won’t be the same every week and some weeks there may not be any good options to mix.

Toys often apppear in 3for2 offers with half-price or better-than-half promotions. In February, I got £39 worth of Lego for £13 using the same principle – three boxes that were less than half price, combined with a three for two promotion. This was awesome, as Lego discounts are rare.

So now you know my secret Boots trick. If you ever come across a Boots deal like this, and I’ve missed it, let me know.