Is it cheaper to get your fruit and veg pre-packed, or bought as individual items? I went to a couple of supermarkets to find out.

Here’s what makes me a deals hunting pro. Last Friday evening, some people went dancing, some people went to restaurants and some stayed in watching films. Me, I weighed and photographed about 20 bags of bananas in Morrisons while people looked at me like I was a mad woman.

Why, I hear you ask? Well, I’ve heard – and I’m sure you have too – that it’s cheaper to buy loose individual items rather than pre-packaged products. So I went out to see whether that’s true.

I presumed that pre-packaged fruit was determined by weight. That’s not the case in Morrisons. It sells £1 bags, with five bananas in each bag. Because of that system, the weight of the bags and the amount you get for your money varies wildly. The lightest bag of bananas I found weighed just under 700g. The heaviest? Just over 900g.

At the till, I weighed up the lightest bag to see how much the bananas would have cost if I had bought five individually – it was 55p. That’s a big difference. I was paying 45p for the packaging. 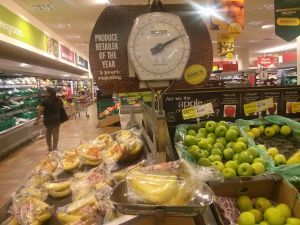 Sainsbury’s seems to use the same system. You can buy three red onions in a netted pack for £1, or you can buy them loose. Again, the amount in the pack is based on numbers rather than weight, so it’s worth spending a couple of minutes weighing the packs to find the best bargain – the heavier it is, the more you’re getting for your money.

I had to rush this bit, as a security guard didn’t appreciate me taking photos. I still found a pretty big difference with the first two packs I picked up. The smaller pack was just over 400g, the larger just over 500g.

At the till, I weighed the smaller pack as if I was buying the three onions separately – it came to 42p. So the pack cost more than twice as much, just for a bit of netting. 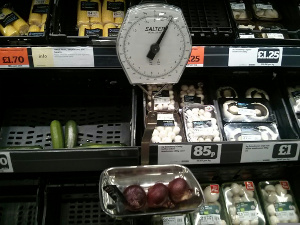 For this test, the plan was to compare the same cheese from the cheese counter to one on the shelf – I choose President Brie.

So, again, it’s cheaper to buy cheese that isn’t pre-packaged, but be aware that packaged cheese might have a deal on, so it’s worth checking both aisles before you buy.

What gets you more olives? A 285g jar or stuffing as many as you can into a tub from the self-service salad bar? I decided the best way to compare value was to count the olives out individually, because the weights weren’t fair as the jar had sunflower oil in.

So what’s my conclusion?

When you can, try to buy loose items or products from behind the counter.  But keep an eye out for discounts on pre-packed alternatives. Or if you’re  going to go for pre-packed items, make sure you weigh them and get the heaviest bag/pack, so you’re getting the very most for your money.