The battle of the shower gels: Which one is truly mint?

Could you tell the difference between fancy Original Source mint shower gel, or a cheaper version that’s nearly the third of the price? I did some testing to find out.

There’s a big player in town when it comes to minty shower gel – Original Source. It comes in 250ml bottles and its RRP is £2.20 (although it’s often on offer).

The budding contender is Kick Start! from Aldi at 75p – also for a 250ml bottle.

Both bottles boast 100% essential oils from mint leaves, are suitable for vegans and have ‘the tingle factor’, which is something you may or may not appreciate on your bits.

But which one’s the best value for money? With the help of my MSE colleagues, I decided to pitch them against each other to find out… 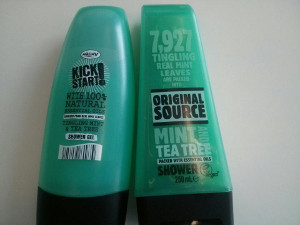 I emptied the bottles into two separate bowls, so my colleagues couldn’t be swayed by any potential brand loyalties.

The bottles have a similar shape, although the Kick Start! bottle looks a bit more curvaceous.

The colours are both a vibrant green and the bottle tops black. There’s definitely a strong resemblance.

In terms of the shower gel itself, the Original Source is glossier and a bit more transparent than the Kick Start!, which is more matte. But they are equally thick in texture.

Generally, the office seemed to prefer the look of the Aldi version, with comments ranging from it is slightly less “in your face” it it looks less “chemical”.

Now on to the important bit – the smell.

Some of my colleagues weren’t into either, saying they smelt a bit like mouthwash.

It’s fair to say they both are pungent, smelling like mint and tea tree oil so you need to like that kind of smell. But The Original Source had a slightly stronger smell.

Most people liked the fact that Original Source had a stronger smell. However, they preferred the look of the Kick Start! Bottle.

Summing up, the majority of my colleagues thought the cheap Kick Start! shower gel is just as good – or even better – than the more expensive Original Source. So my tip is, unless you love the super strong smell and would pay extra for that (or wait for it to be on offer), stick to the cheaper Aldi version.