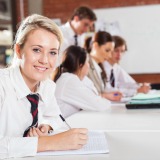 The financial education provided in schools is to be expanded so teenagers are given lessons on pension planning, under Government plans announced today.

The Department for Work and Pensions (DWP) says it is teaming up with financial education charity the Personal Finance Education Group (Pfeg) to produce new teaching materials to help get more information about financial planning into classrooms and boost saving for later life.

MoneySavingExpert.com successfully campaigned for financial education to be added to the national curriculum in England from September 2014. However, this is only compulsory for around half of all schools – free schools and academies don't need to follow it.

The new resources – which may include exercises, worksheets, videos and online content – are expected to be ready for use this September and would initially be aimed at pupils aged 13 and over.

The DWP says the aim is to enable teachers to "plan more inspiring lessons about the importance of pension saving".

Pupils will also find out more about how they could be automatically placed into a workplace pension from the age of 22 as part of the Government's efforts to foster a stronger savings culture.

Pensions minister Steve Webb says: "It's understandable for young people to glaze over when you ask them to think about retirement and pensions. But when you tell a teenager that this is going to affect them from the age of 22, you get quite a different response.

Only one in every 20 workers aged between 22 and 29 has chosen to opt out of automatic enrolment, according to Nest's figures.

Why do young people need to know about pensions?

The DWP says that Webb recently quizzed a group of teenagers from St Albans Girls' School in Hertfordshire about their pensions knowledge.

He found that expectations for what they would receive as a state pension ranged from £800 a week to £9 a week. The current weekly state pension is £113.10.

Seven out of 10 of the teenagers asked thought the Government would provide most of their income when they retired and eight out of 10 expected to retire when aged in their mid-60s.

Mr Webb said: "This is clearly an outstanding school with impressive, engaged and politically aware pupils, and my visit convinced me that it is possible to talk to young people about these long-term issues in a way that interests and engages them.

"But we have to give teachers the tools to do the job."