Asked to pay in euros abroad but charged in pounds? You're not alone in being ripped off

Holidaymakers are losing out by being charged in pounds despite explicitly opting to pay in local currency, according to reports we've had from MoneySavers. We're now investigating to see how big the problem is – here's what to do if you've been affected.

When paying on a card abroad, you're often asked if you want the transaction to be in pounds or the local currency.

As a general rule, we say never pay in pounds – if you do, through a process known as 'dynamic currency conversion', it'll be the store's bank which does the conversion for you, and it'll almost certainly work out more expensive. See Martin's Always pay in euros blog for full info.

Yet we've heard a string of reports from holidaymakers who've ended up being charged in pounds despite having asked to pay in euros – sometimes even after the salesperson or the holidaymaker has apparently pressed the correct 'pay in euros' button on the card machine.

If this has happened to you, we want to hear from you. Let us know at news@moneysavingexpert.com.

Why it's a problem and how it'll cost you

If you use a debit or credit card overseas, either to take cash out of an ATM or to pay in a shop, restaurant or hotel, you're sometimes given a choice on how to pay.

Marketed as a way for travellers to know exactly what they are paying in their home currency, dynamic currency conversion is offered on many card terminals in the EU, including at popular holiday destinations.

It's always worse to pay in pounds if you've a top overseas credit card that doesn't charge the usual 3%-ish commission most cards do, as the conversion would mean you wouldn't get the near-perfect exchange rate you should get.

If you've a card that charges that 3%-ish fee it's less clear-cut, as it depends just how bad the exchange rate you get abroad is. But it's still usually much safer to pay in local currency. We've seen mark-ups of up to 18% which would eclipse the charges on even the worst card to use abroad.

If you're offered dynamic currency conversion then it's the store or restaurant's responsibility to make sure you're offered a choice and you pay in the currency you choose. Yet it appears this isn't always happening – and it's worth noting that foreign banks and overseas stores often make a mark-up on transactions if you opt to pay in pounds, by splitting the commission.

At least a dozen MoneySavers have told us they've been charged in pounds via dynamic currency conversion, despite asking to pay in local currency.

In many cases, this seems to have happened despite the holidaymakers themselves pressing a button opting to pay in euros, or witnessing a shop assistant or waiter do it:

What do the receipts show? 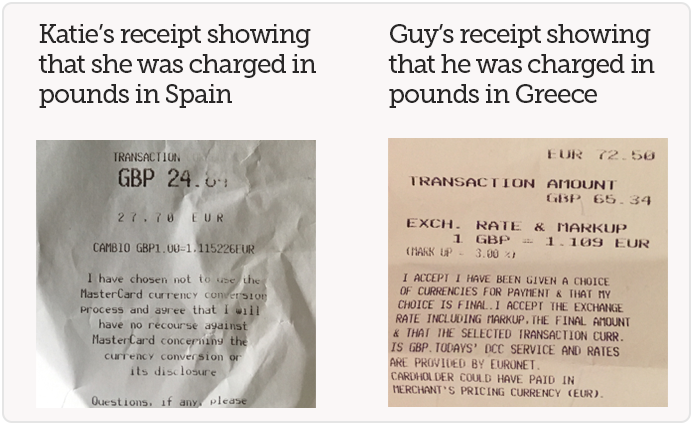 What to do if you've been charged in pounds

Here's how to avoid being caught out:

In Katie's case, after we contacted her credit card firm Halifax on her behalf, it told us that it had reviewed the transaction and confirmed it was in pounds and refunded Katie using chargeback.

A spokesperson told us: "We have temporarily credited the full amount of £24.84 to the customer's account and returned the charge to the merchant who have 45 days to accept or challenge our action."

If you ask to pay in euros and are charged in pounds, it's often hard to pin down what went wrong unless you immediately query it with the store.

A Mastercard spokesperson told us it was an issue they were aware of and added: "Quite often smaller merchants who aren't used to dynamic currency conversion just go through the motions on the point of sale as quickly as possible to get the payment done."

We attempted to contact some of the shops and restaurants that had charged MoneySavers in pounds, but none was willing to comment.

Experts we asked about this weren't able to comment on the specific cases in this article but said it's likely to be an error (or a deliberate ploy) by the shop or restaurant. Yet we're still not convinced what the cause is – so we're investigating further and wanted to put this story out now to find out the extent of the problem.

If you've clearly chosen to pay in local currency but were actually charged in pounds, please email us at news@moneysavingexpert.com. People may be put off claiming for what is only a few pounds at a time – but if this is a more widespread issue it could be a big money-making scheme for whoever's responsible.

What do the regulators say?

The European Banking Authority told us that "a number of consumer organisations and other groups (including the European Parliament) have raised concerns in this area."

New rules which come in next January will provide some additional protection for consumers withdrawing cash from ATMs, but are unlikely to help those caught out by shops and restaurants.

A spokesperson for the UK regulator, the Financial Conduct Authority, said: "The advice for customers really would be to make sure you know what currency you are paying for something in, and to ask for a receipt so you can take it up with the merchant immediately afterwards if there are any problems."

What do card issuers say?

A Barclaycard spokesperson told us: "It is solely the cardholder's decision on whether they pay in local or their billing currency.

"By default, payment terminals must show the amount a cardholder will be charged in local currency of the territory in which they are making the purchase. This should show the transaction amount in the local currency and the total transaction amount in the billing currency including the exchange rate and mark-up, to allow cardholders to make an informed decision as to whether to proceed or not."

"Cardholders have the right to refuse the offer and have [the] transaction billed in the merchant's local currency, which will then use Visa's conversion rate."

A Mastercard spokesperson said: "No matter which card is used, it is the responsibility of the bank that provides card acceptance and dynamic currency conversion functionality to the shop who is responsible for ensuring the shop is compliant. If they remain uncompliant, ultimately they will have acceptance taken from them."

Asked to pay in euros abroad but charged in pounds? You're not alone in being ripped off