The danger with outlet shopping 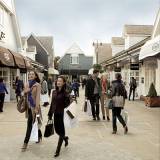 Outlet store shopping is great for bargains but not so great when things go wrong, it seems.

With such stores featuring heavily in the news — M&S is offering its outlet range online at 40% off standard prices from today — this blog should serve as a warning to shoppers.

I say this from personal experience from something that happened only today.

The saga started on Boxing Day when I drove an hour-and-a-half from my London home to the Bicester Village outlet centre near Oxford to pick up a few bargains.

With a mix of the ‘January sales’ and the fact the clearance items at such shopping centres are already hugely discounted, I picked up some corking deals.

But two weeks ago, when I tried on a Hugo Boss T-shirt (which cost little more than a standard M&S T-shirt) I’d bought on that trip for the first time, there was a small hole near the bottom.

Now, the damage may have developed since I bought it. But since all I did was load the item into my car and then onto a hanger, it was probably there already and I’d missed it in the shop.

Yesterday, I took the T-shirt to the Hugo Boss store at Westfield, Shepherd’s Bush, hoping for a refund or exchange.

The assistant didn’t quibble about the legitimacy of my claim, but insisted I had to take it back to Bicester. Outlet store purchases must be taken back to an outlet store, according to the terms and conditions. M&S, and some others, operate a similar policy with their outlet stores.

I asked if she’d do me a favour and help me out as Bicester is a long way to go for a single T-shirt. She kindly took the T-shirt and said she’d speak to her manager.

This lunchtime, I got a call from a very polite and friendly member of staff (I presume it was the manager) saying there was nothing the store could do. I even asked if they could send it onto Bicester for me, but I was told that wasn’t possible.

The staff tried to do all they could but it appears their hands were tied.

I was told I can’t even send the T-shirt myself as both me and my credit card need to be present for a refund or exchange.

So I’ll collect it tomorrow and repair the hole myself (though I’m useless at that sort of thing!) as Bicester is too far to drive for that. It would probably cost half the value of the T-shirt in petrol just to get there and back.

It’s a lesson for me and everyone else. While outlet stores are great in many ways, they don’t come without their risks.

Has this happened to you? You can leave your feedback in the MSE forum or in the comments section below.