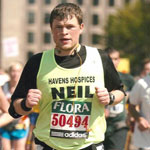 Me running the London Marathon in 2009

As I prepare myself for the start line of my fourth London Marathon this Sunday, I’m finally experiencing charity fatigue.

I’ve asked all my friends and colleagues to donate money over the previous three runs. I’ve still largely got the same bunch of mates, so I feel guilty about asking them again.

So I’ve come up with a few ideas to raise a few more pennies for my charity. Here are 10 of them (I’ve done quite a few myself already).

Some of these may be a bit late for those running in London on Sunday, but hopefully they can help you in future charity quests.

You can suggest charity-giving ideas in the comments section below or in the MSE Forum.

And if you want to donate to my two charities, Vision and Havens Hospices, here’s my charity page: www.virginmoneygiving.com/NeilLock

My colleague Sally Francis is also running the marathon on Sunday for the Motor Neurone Disease Association. Here’s her charity page: www.virginmoneygiving.com/SallyVLM

Update, 24 April. I was slightly under the time I would have liked, coming in at four hours, nine minutes. A massive congrats to Sally too who beat me to the line by a minute or so. As I walk down each stair in pain I can’t help but wonder what next, having got 5 marathon finishers’ medals.