Can you top my 2p biscuits?

I’m taking a quick break from the hard-hitting world of personal finance to talk biscuits.

While at my local Asda recently, I spotted a large stash of Decorate Your Own Christmas Tree biscuit packets (6 biscuits per packet), reduced from £3.50 each to 2p. MoneySaver that I am, I couldn’t resist picking one up. Well, five packets, actually.

I know it’s not Christmas. I don’t even really like biscuits, unless there’s an impressive chocolate-to-biscuit ratio. But at 2p, it was a 99.4% reduction on the £3.50 full price. More importantly, it was hard (if edible) proof that pennies aren’t worthless.

Yes, a recent MSE poll found a whopping 45% of people in favour of scrapping the penny for good. Yes, some now bin their change altogether (see Martin’s blog). But surely I’m not the only one who enjoyed turning a small handful of grubby coppers into an equally small, grubby handful of penny sweets as a kid?

So when I saw the 2p hoard, an immediate MoneySaving childhood regression was triggered. The next thing I knew, I was standing in my kitchen wondering what to do with thirty biscuits that were cheaper per gram than birdseed.

The packs included icing (in that most appetising of colours – green), a stack of six star-shaped shortbread-type biscuits, and various iced bits to stick on.

Now, I like the festive season as much as anyone else. But the prospect of following the instructions to create a Christmas tree made entirely of biscuits in June was bit much, even for me. So, a firm believer in Love Food Hate Waste, I dismantled the kit on a rainy weekend and set to work customising them.

As my hubby will be popping the results of my 2p splurge into his lunchbox for the next, er, six weeks or so, I thought it only fair to try and disguise their humble origins. 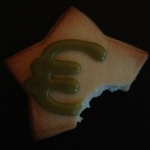 What resulted was a range of themed star biscuits, including a Mondrian homage (main pic) and a visual commentary on the euro crisis (right).

I feel compelled to point out that this was, in fact, an impulse purchase that breaks the site’s Money Mantras: Will I use it? Is it worth it? Have I checked it’s cheaper anywhere else? I hold my hands up – I did not check if my 2p biscuit packets were available cheaper anywhere else.

If you’ve managed to snaffle any small change super-reductions (or found a pack of biscuits for less), please post below or in the MSE Forum.