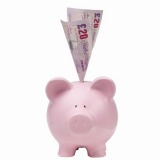 Should I resort to a piggy bank instead?

You’d have thought it was easy to apply for a savings account. Especially as you’re giving banks money. Think again.

I’m in week four of trying to apply for an account, with no luck. It appears the problem is an archaic mixture of banks’ bungling attempts to verify my identity, and curious information on my credit report.

I say "it appears" that’s the problem, because no-one really knows. Banks and agencies are so secretive they don’t tell you straight when it comes to credit reports, so I’m making an assumption based on the limited information I have.

Remember this is all about an industry that is so important to all of us. Wrong information can lead to being declined for all kinds of services.

The three credit agencies — Callcredit, Equifax and Experian — hold data on your payment history that lenders can see to help them determine your likelihood of meeting future payments. They are also used by banks to identify you, which is important to prevent fraud.

The Information Commissioner’s Office and the Treasury Select Committee — after prompting from MoneySavingExpert.com — have previously voiced concerns about the credit and ID checking process. No wonder.

I applied online for a Sainsbury’s savings account last month. I was asked to send in two forms of ID as it could not identify me electronically having searched my Callcredit file.

I had no problem with this, but when I asked why I had to jump through this extra hoop, it wouldn’t say. So I had little chance of pinpointing the source of the problem.

Was it because my wrong address was listed? Did I make a mistake on my form? Do they suspect I’m a fraud? Who knows?

I applied online. A week later I got a rejection letter, saying it couldn’t verify me having searched my Experian credit file and an anti-fraud database (for the record, I’ve never been involved in any fraud!).

It didn’t even allow me to send in documents to prove my identity. The computer just said no.

Fair enough if it can’t identify me, but at least give me the chance to prove my innocence. Like with Sainsbury’s, there was no proper explanation.

So I realised I needed to check my credit files, as the problem probably lay there, I thought. I did this immediately. The results were eye-opening.

All was in order. No fraud, no missed payments, I was listed on the electoral roll and my credit accounts were listed under the correct address — except one crucial detail.

Under my current address field, Equifax listed my old address, even though my active accounts were correctly listed under my present residence.

Further investigations seem to suggest the wrong address I could see was only visible to me, and banks checking up would see the correct info, but that’s not what I was told by customer services initially.

So I’ve spent an anxious couple of days trying to rectify this. Time for some staff training…

I was expecting some real nasties here, given I was rejected by the Post Office based on my Experian report.

Yet all was in order.

I was worried about this one given Sainsbury’s couldn’t identify me using my Callcredit file.

I’m not surprised it couldn’t find me. When I tried to access my file (three or four times) Callcredit (or its sister brand Noddle) didn’t recognise me. Call centre staff weren’t much help, either.

I’ve been told to send in a request for my report by post as apparently I’m able to prove my identity that way.

Heaven knows what’s on that file. Will it claim I’m a convicted card thief or that I live in Scotland (I actually live in London)? Who knows?

You often find out how good a system is and the service offered when things go wrong. In this case, the ID verification process makes Santander’s service seem like gold.

Being rejected by the Post Office when I wanted to lend it my money was baffling when all was in order.

Maybe there’s a good reason I haven’t thought of hidden in the background. But consumers are given precious little information about the ID verification process, and that’s another problem in itself.

As for Callcredit not recognising me? All I can say is that from my experience, no wonder it’s often considered the poorer relation of the three agencies.

What the whole saga demonstrates is the need to check your credit file regularly in case there are problems.

As for me, I may just have to resort to the cash under the mattress trick.

Have you had similar problems? Let us know in the comments section below or in the MSE Forum.

At this point, I should point out an innacurate-ish blog I wrote last month which said I’d been delayed in getting the Sainsbury’s account as the online form didn’t allow me to input my flat number, so I couldn’t be identified. This is what the bank’s customer services department told me.

Having later spoken to a manager at Sainsbury’s, this was not actually the issue. It couldn’t identify me at all. Not that those who live in flats don’t experience problems. They do, as this story shows, though that wasn’t the issue this time.