Last week we warned savers about Re-Give, a new account provider offering very high interest — but crucially NO protection from any compensation scheme if it went bust.

Despite the UK banks’ regulator, the Financial Services Authority (FSA), being aware of the problems for over 10 days, nothing has been done. While in the past this would seem a tiny window, in the age of the internet every second wasted could add to the amount of savers’ cash being put at grave risk.

The Financial Services Compensation Scheme (FSCS) guarantees the first £85,000 saved with an FSA-authorised institution is 100% safe. (There’s full info in our Are Your Savings Safe? guide.)

"FSA-authorised" is the key phrase. The FSCS protection comes when the FSA authorises a bank as a deposit-taker. Re-Give does not have this authorisation.

Instead, Re-Give is registered with the FSA under different regulations — ones that give no savings guarantee, nor test the financial strength of a company. But there is a big difference between being authorised, which is much stronger, and registered. It’s unrealistic to expect the man in the street to know the difference.

So the average customer could easily be forgiven for not realising the lack of protection when taking a look at its website (see the screen grab below). Top, front and centre is the confusing moniker "FSA Registered Mutual Society", while emblazoned high on the left hand side are FSA and HM Revenue & Customs logos.

As you go through the process of opening an account (don’t worry, I stopped before actually risking my money), no prominent warning was shown about the lack of FSCS protection. To find this information takes hunting around the site.

Even then, Re-Give bizarrely promises: "This does not mean that your investment is at greater operational risk. On the contrary, because we are not under the FSCS – it means that we are exceptionally careful, extra vigilant and especially prudent when looking after the funds under our management." 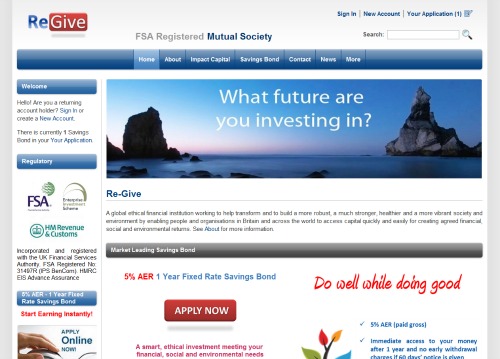 Thankfully, most news outlets which have spotted Re-Give are providing the same warnings as us. The Guardian’s investigation, for example, throws light on the company’s history.

What is frustrating, though, are the actions — or lack of them — of the FSA.

Having been a member of the Financial Services Consumer Panel — an independent body representing consumers’ interests to help the FSA develop its policies — for the past 18 months, I believe the FSA is becoming more alert to practices which clobber consumers. It’s even becoming proactive — to a degree.

However, what it hasn’t realised yet is that in cases like this, which involve the internet and a type of product, savings, with a high volume of switching, then the crucial time to take action is RIGHT NOW.

Instead, over a week since our first enquiry about Re-Give, the provider’s website remains unchanged, still displaying statements and logos that give it the veneer of safety. An FSA spokesperson says: "The FSA is in discussions with the society and we are seeking its co-operation in reviewing its activity."

For the offline world this may well work fine. But the internet moves fast. No one, except Re-Give’s owners, has a clue of the number of savers who have put money in without realising the danger.

The time-lag in the FSA taking action could turn a minor loss into a potentially major risk.

The regulator has a dilemma here. It must do its due diligence properly and any rash action could create future problems. But in this instance, the potential for savers to be misled is both clear and huge.

Over the next couple of years, the FSA will morph into its new incarnation, the Financial Conduct Authority. The rhetoric around the new agency has, so far, been all about consumer protection.

It needs to square this circle of how to act fairly, but quickly, if it is going to have any relevance in a world ever more tangled up in the web.

Let me know your thoughts by posting below, or in the Re-Give forum discussion.