How our Helen helped bring you the Olympics 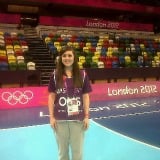 Me on the court

While many are mourning the end of the Olympics, I’m not alone in suffering from London 2012 withdrawal symptoms.

I was a ‘Games Maker’ for two weeks, one of the 70,000-strong "purple army" of volunteers, and what an experience it was.

From Mo Farah’s double gold and all the athletes’ incredible feats, to the giant, inflatable octopus on stage at the Closing Ceremony (was I the only one who didn’t get that?), the past few weeks have been a buzz of fun and excitement and of bringing people together.

I’m sure I’m not alone in feeling slightly sad it’s over. But if I’m ever feeling nostalgic I can always whip out my bright purple jacket and matching cap.

I was honoured to have played my small part in history in helping to make London 2012 happen.

My role was working as a flashquote reporter at the handball. This involved watching matches and taking notes, interviewing players and coaches as they came off the pitch, going to post-match media conferences and then quickly typing up the gathered quotes for the Olympic News Service.

These quotes were then made available to the press to use for their stories.

It was a brilliant opportunity to dive right into the action and learn so much about a sport I previously knew very little about.

It also gave me a chance to pick up new journalism skills, to meet and work with people from around the globe who had all come together as Games Makers and to get an insight into the work that goes on behind the scenes to make such a huge event happen.

It’s amazing to think that before the Games started many were dreading the perceived chaos that would descend on London and other Olympic venues.

Just before the Olympics kicked off only 30% of the 26,000 surveyed by MoneySavingExpert.com said they were loving the idea of the Games, while 40% wanted it cancelled.

But Olympic fever then swept the nation, with 87% of the 21,000 polled in our second survey last week saying they wouldn’t press an imaginary ‘cancel the Olympics’ button (see the Olympics fever MSE News story), and I for one was certainly bitten by the London 2012 bug.

As cheesy as it sounds, it really was a once in a life time experience. Now all that’s left is to bring on the Paralympics.

What did you make of the Olympics? And are you looking forward to the Paralympics? Let us know in the comments section below or in the MSE Forum.