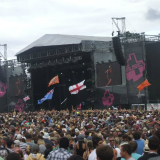 The festival I won't see

Like many of my money-saving comrades here at MSE Towers, I am a self-confessed eBay addict.

I love snapping up anything under-priced. Sites such as BayCrazy and Fat Fingers (which trawl eBay for items that have been spelt incorrectly and so have few bids) have found a firm place at the top of my favorites, as has MSE’s own Local eBay Deals Mapper tool.

So, in early March, when I stumbled across a couple of misspelt V Festical (sic) tickets on BayCrazy, I couldn’t resist bidding on what I thought was an absolute bargain.

But this has turned out to be too good to be true.

The seller initially offered proof of purchase too, which reassured me they were legit (and that ‘Festical’ was just an innocent typo).

The listing — for a pair of weekend camping (+ car park) tickets to the festival in Chelmsford — had a starting price of £99 and one bid. I wasn’t surprised by the lack of bids. After all, who would be searching for tickets to a ‘Festical’?

Bargain — or so I thought

I placed my bid, waited 20 minutes for the auction to end, and then rejoiced that, with a winning bid of £100, I had won two tickets for a festival which normally costs £200 for just one ticket.

After receiving the confirmation email, I paid via PayPal, and contacted the seller with my details so he could send me proof of purchase that was promised in the listing description.

I got a scanned copy of an email he had from See Tickets, which showed four tickets had been purchased for the festival. He blanked out his name, card details, and email address, which, at the time, I thought was sensible.

As with most festivals/concerts, tickets are not normally sent out until a week before the event takes place, so I was not worried when the seller said he would send them when he received them in August.

So two weeks ago, with less than a month until F-day, I contacted the seller to ask if there was any update on the tickets, and also to check he had the right address to send them to.

I sent three emails over the week, none of which he replied to. Alarm bells started ringing, so I tried to find alternative contact details for him on eBay.

When eBay told me I could not contact the seller because he had removed his profile, panic set in.

I tried to file a dispute via PayPal, but you can only do this within 45 days of payment. It was over four months since I paid.

It was a similar story with eBay, which confirmed the seller had deleted his profile, and because the transaction was over 90 days ago, I was no longer protected. It did however give me the seller’s phone number (something I stupidly should have asked for before I paid for the tickets).

My boyfriend got through to the seller, who assured him it was not a con and said he had to remove his eBay account because his email account was hacked. The seller then emailed me on a different email address saying the same thing, and promised he would send the tickets when he got them, recorded delivery.

I began to relax (an email hacking was a perfectly good reason to delete an eBay account), and started to look forward to my bargain festival weekend.

Then, 10 days later, I received an email from the seller asking if I could ring him.

I did, only to be told the person who sold him the tickets had let him down and he couldn’t give me the tickets. He offered to try to find me some more tickets, but I said I wanted my money back.

The seller has said he will send me a cheque for the full amount, but I’m not holding my breath. I’ve learnt my lesson and won’t buy any more festival tickets on eBay.

While my seller may be telling the truth, and I’m sure there are a lot of legit sellers on eBay, the fiasco has taught me online auction sites are a playground for scammers.

Have you had a similar problem? Let us know in the comments section below or in the MSE Forum.

Week from 10 August 2022
View more
Get all this & more in MoneySavingExpert's weekly email full of guides,vouchers and deals
FAQs Privacy Past Emails Unsubscribe