The death of the high street, and the rise of the £1 shop 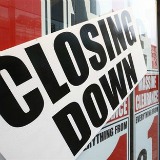 Another one bites the dust

It’s nearly the end of 2012, and for shoppers and their high streets, what a year it’s been.

We’ve seen the departure of Peacocks, the demise of Game and the downfall of Comet. We’ve said adios to JJB Sports, Past Times and Ethel Austin. And we’ve seen Clinton Cards, Jane Norman and Blacks face difficult and uncertain times.

Following in the wake of last year’s swift exits by Hawkins Bazaar, Best Buy, Habitat and Focus DIY, and the famous 2008 “end of an era” exit of Woolworths, the high street is a very different place to what it once was.

Instead, however, the graves of the late high street stores have been filled with pound shops and bargain basements, attracting shedloads of shoppers worried about rising inflation, job security and looking after their pennies.

Perhaps the most noticeable addition to the high street was the chain of Poundworld stores, which rose like a phoenix from Peacocks et al’s flames.

Competing with its rivals (and in some cases, next door neighbours) Poundland and the 99p Store, Poundworld sells cut-price goods at an attractive, round price of… you guessed it, £1.

With so many of these stores now fighting for custom, reports on the MSE forum have emerged saying some Poundland stores are even cutting prices to 98p, just to out-do the 99p Store.

Faced with the same situation as its long-gone high street rival, Virgin Megastore/Zavvi, the only way HMV will survive is if it cuts all overheads and brings everything online, like Zavvi and Woolworths’ successors. Competing with the online big boys like Amazon and Play.com will be tough, though.

It’s every man (or woman) for himself

While I know we’re regularly told we should be supporting the UK’s high streets and their struggling stores by putting cash back into my community, I must also look after my own finances.

Like many, I will be hitting the January sales hunting for bargains. But instead of the high streets, the only thing I’ll be hitting is my keyboard and mouse. As a MoneySaver I know that, unfortunately for the high street, the real discounts are to be had online.

How do you feel about the death of high street stores? Do you welcome the burgeoning number of £1 stores with welcome arms? Let us know your thoughts in the comments section below, or on the forum.