How we joined the Real Bread Club 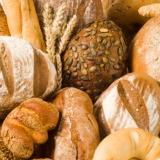 "What’s fake bread?", my friend asked when I told her some of the MSE girls were holding a bread-baking banquet in honour of Real Bread Week.

"Anything else," I told her – my way of saying the processed stuff most of our supermarkets churn out is fake.

Last week’s Real Bread Week was organised by Sustain, a charity fighting for better bread in Britain. It’s a chance to celebrate (ie, eat) real bread by encouraging people to bake their own or buy fresh, delicious, natural loaves from their local independent bakers.

I’d made a few loaves before but only to be eaten by my hubby, who will obviously love anything I’ve made him. So I decided baking for others was the next brave step to take.

We’ve quite a few cake bakers in the office, but very few had made their own bread before. So I was really pleased when so many of the girls said they’d give Real Bread Club a go (the first rule of Real Bread Club is to tell as many people as possible about Real Bread Club).

How easy is it?

Half of our creations were homemade — MSE Becca even got up at 5am to do her kneading — and half from a local independent baker near MSE Towers. All were delicious.

Bread is probably one of the simplest and cheapest foods to create from scratch. Instead, we buy food that’s packed with preservatives and even things like flour improvers and dough conditioners, whatever they are.

According to Sustain, we buy about 12 million loaves a day in Britain. Three-quarters of us eat it every day. Around 95% is made by big business. And even worse, Government stats show up to a third of it then ends up in the bin, wasting millions a year. Dough!

You don’t knead any high tech kit to make your own real bread. I think it’s just as easy to make it freestyle as it is in a bread machine. Plus it looks better, being its own natural shape than forced into the shape of a boring rectangle tin.

Most of the new MSE bread bakers said they’d do it again, and I hope we’ve inspired some MoneySavers to give it a go.

After all, why would you want to waste something you’ve taken the time to make with your own fair hands that tastes so good?

Have you made your own and what’s your favourite recipe? Let us know in the forum or comments section below.