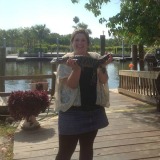 "I know how to snap up a bargain"

As a general rule, I don’t spend money on anything without a bit of research. Buy a dress without going meticulously through hundreds of reviews? You must be joking. I just can’t take that risk – it’s retail Russian roulette!

So I’ve just come back from a road trip in the USA (tip: tell your bank if you’re going on holiday to avoid rejected payments and stressful calls in Disneyworld). All in all I booked about 20 different hotels, so you can imagine the hours of research I put in.

A less organised person may think life’s too short to put in all that effort – but thanks to those hours spent in the rainy UK, every single hotel was lovely, a bargain and in a great area. Apart from one…

We wanted to spend two nights in New Orleans (although I’d have spent two years there if I could – gumbo, anyone?).

I was told the French Quarter was the only place to stay, as a hotel there would mean we were in the middle of everything (no late night taxis, etc), and it was also a safe area.

But I noticed pretty quickly that hotels weren’t cheap. In fact, they were extortionate. So I thought I’d roll the dice, throw caution to the wind and try a secret hotel. I was pretty happy – I got a bargain. Or so I thought.

On the Sunday morning we had to check out and leave New Orleans, a bit of paper was put under our door. It was a $116 (plus tax) bill.

Saturday night had been fun, but surely I’d have remembered drinking $116 of cocktails at the lobby bar, or throwing a TV out of a window.

But no, it was the parking and internet bill. Seriously. Parking was $38/night and internet was $20. Hardly value for money.

So no matter how you book your hotel – do your research.

My tip is to scour hotel reviews. You’ll get all the insider knowledge from people who aren’t trying to sell you anything.

You’ll also find out about all the hidden costs such as hotel tax, parking, and wi-fi to make sure you’re actually getting a good deal.

And anyway, the research and preparation is one of the best parts of the holiday. Oh, is that just me then?

What are your thoughts? Let us know in the comments section below or in the forum discussion.