The day I bought a beer with virtual currency Bitcoin 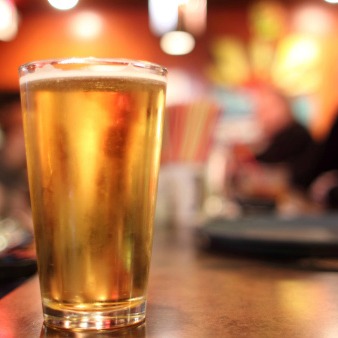 Would you use Bitcoins to puchase a pint?

A virtual currency might sound like the stuff of computer games, but the growth of online money such as Bitcoin is something we increasingly hear about in the mainstream media.

Its enthusiasts champion it as “a force for good” and “bigger than the internet”, while critics dismiss it as dangerous and volatile.

Let’s be clear. From the beginning, Bitcoin involves huge risk. It’s not something I would get involved in. But if you think it’s for you, do your research and make sure you know exactly what those risks are.

That said, Bitcoin is an intriguing idea that’s going to be talked about more and more, and it’s worth learning a bit more about it.

Rather confusingly, the first thing to know about Bitcoins is that they aren’t really coins at all. The currency is completely virtual, although some unofficial physical coins have been created. Each of the approximately 11 million Bitcoins currently in existence are represented by a unique online code, rather than the physical coins or paper notes we’re used to.

The 64-digit codes are created through a process called “Bitcoin mining”, which involves solving tremendously difficult mathematical problems that are too complicated for humans. Instead, “miners”, as they are known, run expensive, high-powered computers for days and months at a time. When an equation is successfully cracked, they are rewarded with Bitcoins.

About 3,600 coins are made available each day (a single coin’s worth roughly £62 at time of writing), until a limit of 21 million coins is reached.

Bitcoins can be bought from dedicated exchange sites with almost any currency, and then saved in a virtual wallet. As mining is so difficult, this is the most common way of getting some.

Beware, though. As you’ll see below, the value of a Bitcoin can rise or fall extremely quickly.

What are they used to buy?

As Bitcoin transactions are untraceable and completely anonymous, those accepting the currency include some pretty dodgy sites offering questionable, and often unlawful, products and services.

Though not everyone who accepts them is bad. In Berlin’s Kreuzberg district, you can spend Bitcoins in a number of shops. And in east London, you can even buy a pint in the currency.

I paid a visit to the UK’s first Bitcoin-friendly boozer, the Pembury Tavern in Hackney, which started accepting it in June.

My friend, a “Bitcoin believer”, treated me to a pint of foaming, nut-brown ale. Our barman used special software on his till to create a unique QR code (the square barcodes you may have spotted popping up on certain products). Instead of handing over a creased-up £10 note, my friend scanned the code with his smartphone and then confirmed payment via his virtual Bitcoin wallet.

I was stunned by the speed of the transaction. It’s faster than paying by card, and certainly quicker than rummaging through copper and silver.

Is it safe to pay with Bitcoins?

We paid 0.2 Bitcoins for three drinks (about £12). However, since the currency is so unstable, the value of those 0.2 Bitcoins could have changed, even in the 10 minutes after we arrived at the pub.

Bitcoin prices fluctuate almost from minute to minute. This means we may have paid £12 for three drinks or found ourselves paying something absurd like £36 – crazy, even for London.

Similarly though, if the currency experienced a sudden dip, we may have paid as little as £4.

Bitcoin’s most spectacular extreme came in April 2013, when it hit a record high of £169 a Bitcoin before dropping to £52 soon after. Its value has been as low as £19.

Why is it so unstable?

While all currency requires a certain level of user trust, Bitcoin is particularly vulnerable to dips in confidence. At present, it survives because enough people believe it is worth something.

However, there’s a risk that a large scale cyber-attack, a software bug or, perhaps most deadly, a government banning the currency (a very real prospect in the USA) could result in user trust (and thus Bitcoin’s value) collapsing beyond repair.

If that happened, there’s no safety net in place and people would lose everything.

No one single person controls Bitcoin, and it is independent of any government or company. So unlike a bank, there’s no central body in charge of calming changes in the currency’s value.

It was set up by an unknown developer called Satoshi Nakamoto (a sort of Banksy of the online currency world as no-one knows if that’s his real name), but he stepped away from the project in 2010.

Instead, it’s ruled by a complex set of mathematical equations, designed by its creators to, in theory, ensure stability in the currency.

Yet, so far at least, it is proving anything but stable.

Have you tried out Bitcoin? Please share your thoughts below or in the forum discussion.