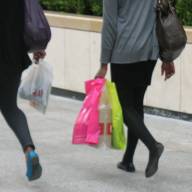 Debs arrived too late to bag a bargain

It wasn’t my first time queuing in the early hours for the sake of a bargain, but this year I hadn’t intended to queue at all.

I rocked up to Next in Canterbury, Kent, at bang-on 6am, expecting to catch the tail-end of the queue filtering into the shop. But I was shocked to find a queue around three sides of the building.

My first thought was to go home. But I’ve never been good at cutting my losses, and felt that having bothered to set an alarm, get dressed and walk to the city centre was too much effort to forgo.

So, I joined the queue and waited. After 20 minutes or so, I’d moved about five paces and was seriously considering going home again, not least because I was getting increasingly envious of the woman in front of me drinking tea from a Thermos. But I figured I’d already invested so much, it’d be foolish to leave. How wrong I was!

After 50 minutes of standing in the cold and listening to other people’s conversations about how much chocolate they ate the day before, I was finally within sight of the door.

As I waited with the other (crazy) bargain-hunters for the next eight people to leave so we could get in, I thought over the homewares I wanted to buy with my Christmas gift vouchers and wondered how many would be half price.

That was when I overheard the crowd-control person say people had been queuing since 3am, and felt like a bit of an idiot.

Unfortunately, that feeling only got stronger as I finally made my way through the door, past shoppers laden with piles of clothes, and up the escalator to the homeware department.

There, I found near-empty shelves and a huge queue for the checkout. It was 7am and there was barely anything left – just a couple of photo frames and some ugly cushions. A part of me wanted to buy something just to make it worth the effort, but thankfully my MoneySaving instincts kicked in and I bolted.

I was definitely a bit gutted. After all, I’d asked for Next vouchers for Christmas, made a list of the items I wanted to get and got up at stupid-o-clock the day after Christmas, all for nothing.

But, on reflection, I’m glad I went; not only because it meant I was bright as a button by the time Debenhams opened, but because I know that next year, I’ll have myself a nice lie-in on Boxing Day, safe in the knowledge that I’m not missing out.

Did you get up early to brave the festive sales? Share your experiences below, or in the forum thread.