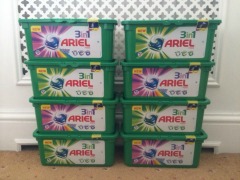 As creatures of habit, my fiancé and I tend to go food shopping for the week on a Saturday afternoon. But one particular visit to Tesco was anything but routine.

Boxes of Ariel 3 in 1 laundry pods, which last 30 washes, were reduced from £10 to £7, so we decided to take two – one for colours and one for whites.

Having paid, I always take a moment to check over the receipt to make sure everything’s priced correctly, all multi-buy offers have been applied and to see if any coupons we had have scanned through properly.

Looking through, I noticed we’d been charged the full price for both boxes. So we’d paid £20 in total when we should have only paid £14 – a big £6 overpayment.

But I wasn’t angry or annoyed as you might expect. In fact, I was smirking on the inside, as I knew Tesco’s Double The Difference policy would compensate me the amount I’d been overcharged by, PLUS double the cash back because of the inconvenience of being overcharged.

Rather than head straight to customer services, I sneaked off down the laundry aisle to buy another six boxes. Hey presto, again, I’d been overcharged by £3 on each box – a total overpayment of £18.

So with the Double The Difference policy, we received £48 in cash from the lovely lady behind the till. Here’s how it worked…

The saving means we’ve now got 240 washing pods for a £32 spend, which will keep us going for at least a year.

This was the first time I’d been overcharged for an item at Tesco and actually went ahead with getting Double The Difference, and it certainly created a bit of a buzz to the usual boring weekly shop.

Who knows what else we’ll find when we head to Tesco this weekend. I’d love to hear if you’ve had any similar Tesco bargains. Please let me know on the forum thread or via Facebook below.