Make do and mend – I’ve turned into my mother! 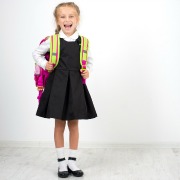 Three years on and my daughter's uniform is still going strong

I’m sure we all remember our mums saying "you’ll grow into it" when we were kids. I never thought I’d end up the same. Yet here I am, three years after my eldest daughter started school, hoping she doesn’t have a growth spurt in the next three months.

In my eldest daughter’s first year at school – reception class for the uninitiated – I bought her a jumper and a cardigan with the school logo on. It was in a size that was quite a bit bigger than she needed as I’d hoped it would last for a while and I wouldn’t have to shell out on buying a new set.

At her school it isn’t compulsory to buy school uniform with the logo on, although it’s nice to have two smart ones for special occasions like school trips and school photos, so she also has cardigans from Aldi and M&S too.

But I definitely over-estimated the sizes. I thought I’d be buying new uniform after a year or so. Yet almost three years later she’s coming to the end of Year 2 and her clothes are still going strong.

Granted, they’re a little faded and the cuffs are a bit frayed. But while I should get the sewing kit out, for now I’m just turning the cuffs back.

She moves up to junior school in September where the uniform is blue – at infant school it’s red – so I need to order a new uniform now so it arrives in time for the start of the new school year in September.

Someone asked me if I’d sew up the old red uniform and pass it onto my younger daughter who starts school for the first time in September. It’s tempting, and I’m going to reuse the plain cardigans for her, but I’ve decided it’s only fair she gets a couple of new items with the school logo on just as her older sister did.

Now I just need to guesstimate what sizes to order for both of them that’ll last at least another year or two! If you’re a parent, grandparent or guardian, what do you do to make your kid’s uniform and clothes go further? Tell us below or in the forum.