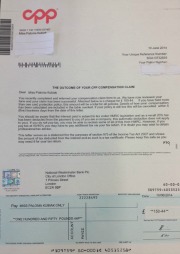 Up to seven million people were mis-sold credit and identity theft cover from banks and CPP. At the end of last year, all those affected were asked to vote on a redress scheme to get their money back.

As it needed a majority to vote ‘yes’ for people to get their money back, that’s exactly what I did (see my previous blog Why I’m voting ‘yes’ to the CPP card protection redress scheme).

And earlier this year, the vote worked in my favour as I received my reclaim form.

While I knew I was mis-sold the protection policy – I was 20 and had just taken out my first credit card and I didn’t feel I was given the full information about the insurance – I was still a little sceptical about filling in the form.

What if they didn’t believe me or I didn’t coherently explain how I was mis-sold the policy?

I read MoneySavingExpert.com’s Reclaim CPP Card Protection guide for the full information, especially the section offering help on filling in the claim form.

After five minutes of putting my case forward on paper, I popped it in the post about a month ago. I forgot about it until yesterday evening when I came home to a nice surprise.

I received a letter with the outcome of my CPP claim, and the first thing that grabbed my attention was the cheque for £150.44 enclosed.

Minus tax, the total came to just over £150. I thought I had paid about £80 for the policy all those years ago, but this cheque was a lot more than I was expecting.

My fiancé and I have just bought our first home, so the money will definitely help us out with removal costs.

It took a few minutes to complete and I’d urge anyone else sitting on the form to just fill it in. The money is rightfully yours – you were mis-sold a worthless policy. Now’s the time to get it back before the August deadline.

Have you successfully reclaimed yet? Tell us below or in the forum.