Protect your health and pocket by joining the Stoptober challenge

My dad has always been a smoker and I’ve always encouraged him to stop. So when Stoptober came up in a forum brainstorm session, I jumped on the chance to help run the campaign.

The idea behind Stoptober is to challenge people to give up smoking during October. It’s great as it not only improves people’s health, but it helps their pockets too.

A smoker of 20 a day earning an average wage will spend nine weeks a year working to fund their habit, according to our Demotivator tool, and it’ll cost them £3,000 over the course of a year.

That’s a lot of potential savings you could make and then sink into other things, such as repaying any debts or being able to afford an extra little treat you maybe couldn’t have justified before.

As someone who would rather spend their money on Céline than cigarettes, I probably need a Stop-Shopping-tober of my very own. But rather than giving up smoking (or shopping), I am in the forum every day providing support on our Stoptober thread.

I also went to visit the Stoptober roadshow when it came to London. As soon as I got there, I was told to stand in between two jugglers as they threw juggling clubs either side of my head! It was incredibly close but I escaped unscathed. 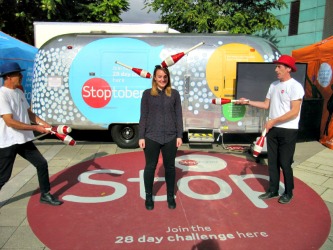 Here I am getting involved in the Stoptober action 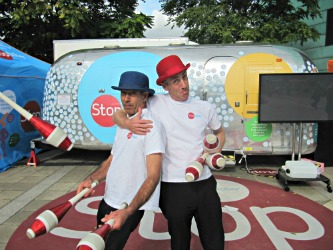 Jugglers at the Stoptober roadshow

On a more serious note, the jugglers worked fantastically to grab the attention of young families passing by to encourage them to learn about the Stoptober campaign.

While there I also spoke to Rowan from the local NHS Stop Smoking service. She gave me an insight into the toll smoking can have on your health – and your wealth.

Rowan explained how the roadshow targets the areas of the UK with high smoking rates, and that in these areas, it is often the cost of smoking that motivates people to quit – rather than health concerns.

She said the best way to quit costs nothing: "The most effective way to stop smoking is support. Things like Stoptober also really help. It takes the pressure off those quitting and provides a light-hearted escape from withdrawals." 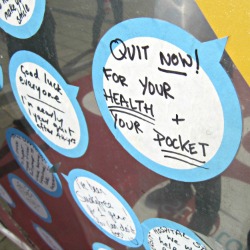 Quit now for your health and your pocket

As most people find cold turkey hard, I asked her what she thought of e-cigarettes. She said: "As they weren’t marketed as a stop smoking tool, I’m not convinced. There are also large doses of heavy metals in them, which aren’t healthy. However, they are a lot better than smoking cigarettes, so if you have to use them to quit, it’s better than relapsing."

She also recommended NOPE – Not One Puff Ever, a mantra to keep you on track when those cravings are particularly strong. "You can never have ‘that one cigarette’ to tide yourself over, always be strict on yourself."

The roadshows will be continuing around the UK this month, although there’s no schedule for when they will turn up – just keep your eyes peeled. There’s a bit more info on the Stoptober Facebook page.

It’s never too late to quit

According to Stoptober figures, over the course of 28 days, a 20-a-day smoker will save a huge £250. That could be a credit card cleared, a weekend away or even 1/4 of a Céline handbag (I’ll get there one day!).

But just because Stoptober has already begun doesn’t mean it’s too late to stop smoking – it’s never too late to quit.

For help and support you can join our forum, which is full of MoneySavers who’ll give you tips on how to stop, as well as ideas on what to do with all that extra money at the end of Stoptober!

Are you taking part in Stoptober? Or do you have any tips to help others quit smoking? Please let us know your opinions in the discussion below or in the forum.

As giving up smoking is hard, we’ve also lined up a few surprises for our forumites during the month. One of these was a Twitter Q&A with Stoptober celebrity ambassador, comedian Lee Nelson (real name Simon Brodkin).

All the questions below were asked by the MSE Forum team and all the answers were given by Lee Nelson. Here’s what happened… 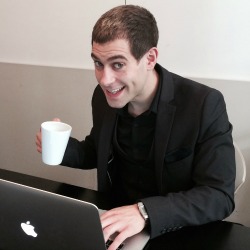 Q. @MSE_Forum: What was your first job?
A. @RealLeeNelson: I’ll let you know when I get it.

Q. If money were no object what would you buy?
A. Two cinema tickets – not on a Wednesday.

Q. Are you giving up smoking for Stoptober?
A. Of course, I think Stoptober’s amazing. I always start smoking again in November to be part of it the following year.

Q. How many did you smoke a day?
A. Once I’m awake I’m like clockwork, one ciggie every 30 minutes. So I’m usually a 10 a day man. Four on weekends, you need a lie in.

Q. Best joke off the top of your head?
A. Alan Pardew.

Q. What will you be doing with the money you save this month?
A. I’d invest it very wisely in scratch cards.

Q. Who’s the biggest diva of the Stoptober ambassadors?
A. Jason Bent. He doesn’t get into bed for less than £200,000.