This wasn’t my finest moment. I’d had a few drinks (please be Drinkaware), and after a quick stopoff at the cashpoint, I’d jumped back into the taxi with my £30 withdrawal left dangling out of the ATM like a carrot for thieving passers-by.

This was during the summer of 2006, when I was a 19-year-old student with a light grip on my finances and a taste for cider with Ribena in it.

Luckily, I’ve since seen the errors of my ways. I work for Martin Lewis, so obviously I now cherish every penny I earn and also help others take similar care of their hard-earned money. Even my drink choices are more sensible.

So, when Nationwide sent me a letter last week, completely out of the blue, saying it would pay back the £30 I’d stupidly left at the cash machine almost nine years ago, plus a nice, juicy bonus of £6.84 in backdated interest, it seemed there was only one possible explanation.

I thought it must’ve been an apology from 19-year-old me. A gift. A consolation prize. Whatever you want to call it, it was a taste of what could’ve been lining my pockets had I not frittered my money away so easily in the past.

But in actual fact, Nationwide’s been catching up on some housekeeping. My £30 cash was luckily never stolen (this had been my assumption, which is why I never reported it to my bank), it was simply sucked back into the machine, but never paid back into my account – until now, that is.

Still, I reckon I should get the letter framed as a reminder of how far I’ve come on my MoneySaving journey. 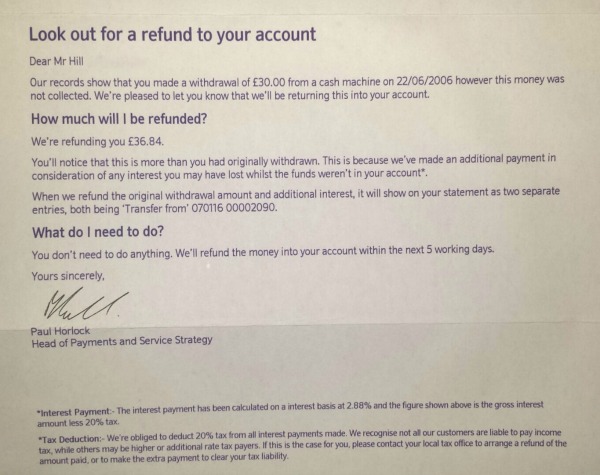 The Surprising letter I received from Nationwide

Is everyone being sent these refunds?

After I got my letter, MSE Paloma looked into the issue to see if it’s more widespread, and here’s what she found.

Back in December 2012, it was revealed that hundreds of thousands of people were in line for a refund of cash, which they’d left in RBS, NatWest, Tesco and HSBC ATMs. So we checked where the major providers currently are with their redress schemes:

We’d love to hear your stories about found or rediscovered cash. Share on our forum.