How I popped my upcycling cherry and saved £65+

Have you ever considered upcycling to save cash but never taken the plunge? Well, that was me until now.

I was recently looking for a shelf for my daughter’s room but couldn’t find exactly what I was looking for. I found one I quite liked in Ikea but it was £75 – far too expensive, while another one I liked in Tesco was still £50. So I looked in Wilko instead and while cheaper, it still wasn’t what I was really after.

However, I have recently been reading some fab crafting, upcycling and make-do-and-mend forum posts and blogs, and September’s ZeroWasteWeek finally prompted me to have my first go at upcycling.

It didn’t go entirely to plan (but it worked out OK in the end), so stalwart upcyclers please forgive me for what you’re about to see…

As it happens, I’m on an ongoing mission to declutter the house and garage – quite a battle as I have a natural hoarder for a husband but that’s another story – so I’ve been trying to clear them bit by bit over the summer.

As I cleared some of the garage guess what I found? This old shelf – perfect!

I found an old shelf in my garage

Luckily I also uncovered a can of white spray paint, so I didn’t need to spend on paint at first…

However, the spray paint ran out after a couple of coats and I had to buy more. I paid £6.74 at B&Q but I later spotted it much cheaper in Aldi. So if you’re in need of some paint, make sure you compare prices at a few stores before buying.

The shelf after a coat of paint

And after a second lick of spray paint

It was on the third coat of paint I realised I maybe should have used a primer first. Perhaps this is where shabby chic originated from though – new upcyclers like me who couldn’t be bothered to start again.

Next, I decided to stencil it. Originally I considered doing flowers and horses but my eight-year-old is Pokémon mad, so I hit on the idea of stencilling characters on it as a surprise. I printed out some online images, cut painstakingly around them and made my own stencils.

Despite family stories that I’m descended from the painter Turner, art is not one of my strong points. My stencils were slightly too small and I should have left more space around them. But the look is certainly a unique one and the main thing is my daughter’s happy with it. 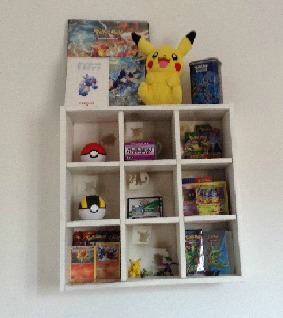 And here’s the shelf on my daughter’s wall

So, instead of a potential £75 cost, the total came to about £7 for spray paint, printer paper and ink.

I haven’t included the cost of the shelf because it was languishing in the garage doing nothing and would have been given away or taken to the recycling centre if I hadn’t used it.

For other upcycling virgins like me, I’m blogging to perhaps help inspire you to give it a go and save money like I did. If I can do it you certainly can.

Have you tried upcycling? Let us know how you get on via the comments section below, or on our Forum Crafting board where there are tons more upcycling and crafting projects to inspire you, including the fab Soulie’s 15 Projects in 2015.