We’ve always warned against paying in pounds abroad, and on a trip to Greece last week I saw the worst example I’ve ever witnessed of the perils of doing so.

With the peak summer-holiday period approaching and your pound getting you even fewer euros, dollars etc following the Brexit vote, there’s even more reason to heed this stark warning.

I took €200 out of a cash machine in Corfu the weekend before last and was presented with two options.

I chose the former, to pay in euros, as you always should – and it turned out I got that day’s rate of €1.23 to the pound, with no foreign load fee added as I’ve a cheap overseas card (the fee is often 3% on an expensive card). For the best cards without load fees, see our Cheap Travel Money guide.

That meant I was charged £162.61, as I later found out when contacting my card firm. But as the photo below shows, had I chosen to pay in pounds it would have cost me £191.84 at a pathetic €1.04-to-the-pound exchange rate. That means the Greek bank was effectively charging its own 18% load.

The evidence of the ‘paying in pounds’ rip-off 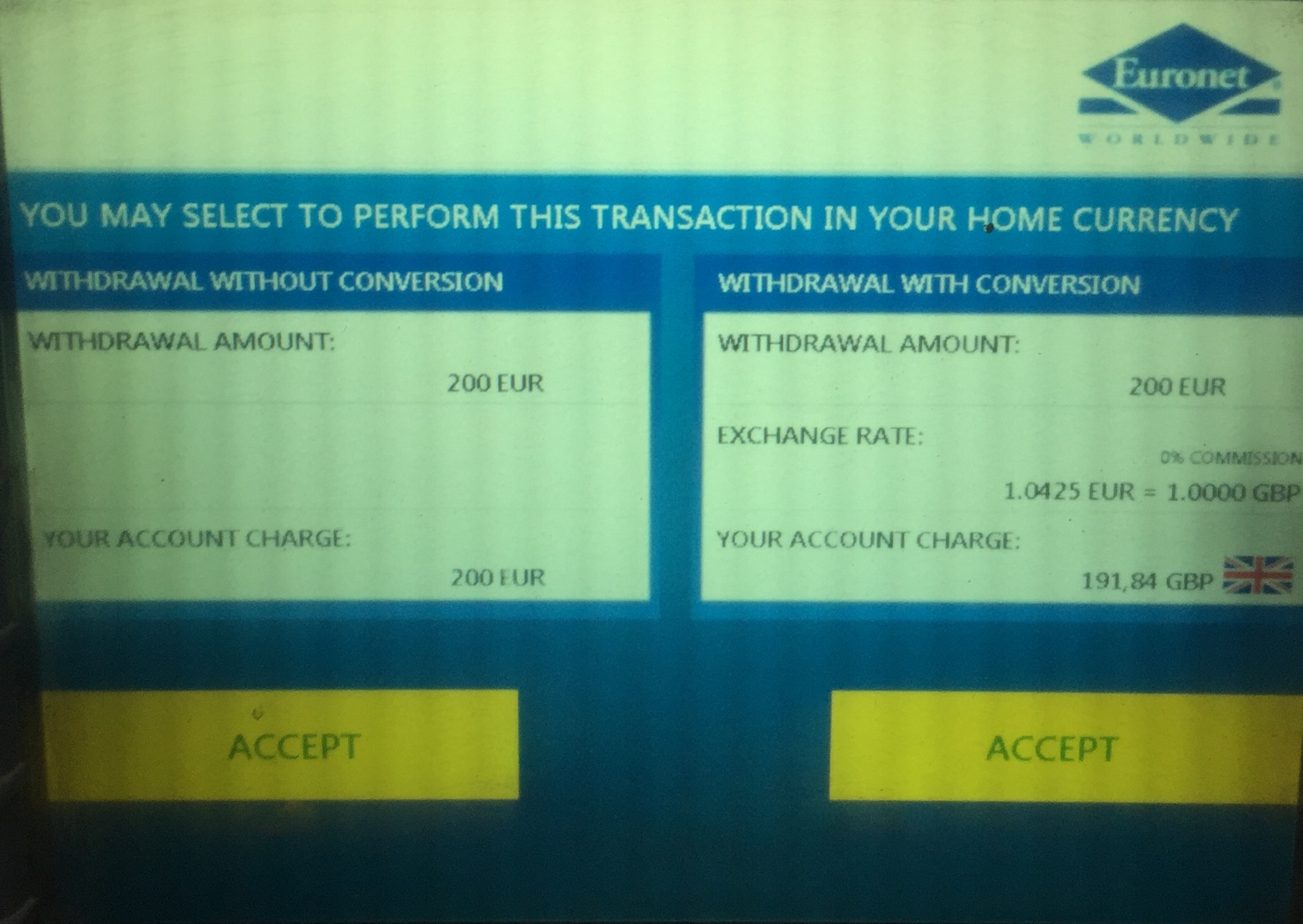 I was so shocked at the extent of the rip-off that I quickly took a picture of the gruesome evidence so I could write a blog to warn people.

What’s more, even when I chose to pay in euros, I was presented with a second screen warning me I’d be at the mercy of my own bank’s exchange rate, to encourage me to pay in pounds. What a cheek!

I ignored the sad excuse for a warning and proceeded to pay in euros.

I also ignored the 0% commission boast you can see on the screen above. What good is no commission if the rate is so dire?

Why you should always pay in local currency

Even if I had a load-charging plastic that cost me 3% – about £5 on €200 – and paid in euros, it would have still worked out at about £25 more expensive by paying in pounds because of the hideous exchange rate offered by the Greek bank.

Load fees aren’t charged if you choose to pay in pounds, as it goes through in sterling, effectively fooling your bank to think you’re in the UK. Yet you’ll likely be hammered by a poor rate doing it this way anyway.

Rates charged by overseas banks, restaurants and shops to pay in pounds aren’t always as poor as I found. Whatever card you have though, always insist on paying in the local currency.

Even if your card charges a load fee you’re hardly ever likely to be better off paying in pounds, so why take the risk? And if you’ve a no-load card you’ll always win paying in local currency as you get as perfect an exchange rate as possible.

If you plan to get your travel money before leaving the UK, always use our TravelMoneyMax comparison tool to find the best rates, and read about a nifty trick to guard against currency fluctuations.