Free Christmas drinks? Grab them now, don’t be too sloe!

It’s Christmas! Well, almost, actually there are less than 100 days to go. But anyway, that can only mean one thing… we’re getting in the Christmas spirits!

Sloes can be found in abundance, for free, in hedgerows over the next few months, so if you’re in the countryside, or even in a city with decent parkland, picking the free food is a no-brainer. Many of our forumites do the same and have a go at making sloe gin each year, and we thought we’d have a go too – and give staff in MSE Towers the strenuous task of testing it for us in a homemade sloe-gin taste test!

I’m more a Baileys girl at Christmas but the glut of sloes on hedgerows this time last year inspired me to have a go at my first homemade sloe gin with the free fruit ready for the festive season. I’d heard it’s more like liqueur by the time it’s ready, so I thought why not? I could give it as a present if I didn’t like it. At the same time I asked our band of Old Style forum regulars for tips on how they make theirs: Sloe Gin Tips please!

As you’ll have seen in the forum discussions, seasoned sloe-gin makers disagree on whether it’s better to use cheaper or more expensive gin. So what better way to test the theory than by running an office taste test and comparing gin prices at the same time? Funnily enough my MSE colleagues respond really quickly to taste test requests so I wasn’t short on volunteers…

This was a fun test rather than a scientific experiment.

My kids and I picked the sloes in late September last year and froze them to pop the skins (this simulates the effects of frost bursting them to get the juices out – you can wait until the first frost but someone else may pick them!). We then defrosted and bottled them with the gin in early October.

As my kids helped the number of sloes in each glass bottle won’t have been exactly the same, but it was near enough. I bought three 70cl bottles of gin: Tesco Value, Gordon’s and Bombay Sapphire. I used one-litre bottles to make it in; the sloes came up to roughly the same point in each bottle. 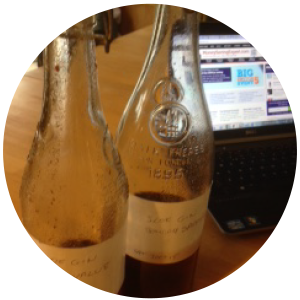 Opinion varies on when to add sugar – some say at the start, some say after decanting the sloes. As I was planning to do a taste test and knew I’d need to decant the berries in early December I chose to add sugar at the beginning – there wouldn’t be time to do it at the end.

I stored the gin in a dark cupboard for a few months turning the bottles every few days. Aficionados say you should leave the gin to mature for several months but for the purposes of the taste test I left it just two months.

Whichever gin brand I used all sloe gins came out the same colour – a beautiful blue/purple – but one of the tasters thought brand C looked darker.

My sloe gins were decanted into bottle A (Bombay Sapphire), B (Tesco Value) and C (Gordon’s) to ensure no one knew which was which.

Everyone testing was asked to leave comments and to score them in order of preference, one being their favourite, three least favourite.

Here are some of the comments…

How did they taste?

And how did they score?

In the end, though, it came down to the marks.

Sloe gin C (Gordon’s) came last with just one tester out of eight giving it top score, the majority of the rest giving it threes.

Sloe gin A (Bombay Sapphire) came second with, again, one tester giving it top score and most others awarding it twos.

That made sloe gin B, Tesco Value, the winner, with six out of eight testers giving it their top score.

Well, actually nine months or so… All I can say is, yes, my leftovers (yes I have leftovers!) taste more liqueur-like than they did when just made. I wonder if they’d be even better next year… if there’s any left!