Halloween MoneySaving and the scary spider that kept coming back

Parents, do you loathe having to spend money on a costume for your kids for an event that happens just once a year? On a costume they’ll probably have grown out of by the next year? I love my girls to bits but I really begrudge spending the money shops and supermarkets try to convince us to spend, hanging costumes in plain sight of our kids, encouraging pester power. Halloween is no exception.

I love trawling through charity shops. Many of my kids’ clothes were bought in my local ones, and handed down from eldest to youngest.

I’m going to risk sounding old when I say that when I was a kid that was normal. I’m a ’70s kid, though, so it’s cool to reminisce about that kind of thing, right? (I’d love to blog on how you don’t know what life’s about if you didn’t wear corduroy flared trousers, watch Fraggle Rock and spend your Sunday afternoons listening to the Radio 1 charts getting ready to hit ‘record’ on your tape deck. But it’s not strictly MoneySaving so I’ll get back on topic…)

I have a six- and a nine-year-old. Around eight years ago when my eldest was a baby I was trawling through one of my local charity shops when I found this spider costume. 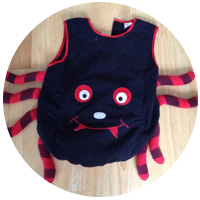 If you’re anything like me and the fantastic community on our Old Style Forum board, you probably also stockpile bargain clothes for when your kids are bigger and fit into them (“you’ve got room to grow” – another fantastic phrase from parents, anyone?).

So, of course, I bought the spider costume, complete with its little Velcro legs that kept coming off, and waited for my eldest to fit into it.

If I remember rightly we got three years out of that spider costume before she outgrew it. The MoneySaver in me was well chuffed!

But, of course, that wasn’t the last of the Halloween spider. Oh, no! Usefully, after daughter number two was born it got several more outings. Sadly, though, while it probably would have still fitted last year, she decided she wanted to be a witch instead. Luckily I’d picked up a witch costume cheap after the previous year’s Halloween ready for just such an eventuality.

But still, I can’t complain. We had at least five years’ use out of the arachnid (maybe more, it’s a while ago and I’ve forgotten) working out at no more than 10p a year.

Being a zero waste enthusiast I really should pass it on to a friend or return it to a charity shop to keep the Halloween love going. I just can’t bring myself to part with it quite yet, though. It’s now a slightly flattened spider in a Poundland vacuum seal bag.