My electricity costs HOW MUCH?! Rogue smart meter tells MoneySaver she owes £100,000+

Energy costs may have been higher than usual over the past few weeks given the recent cold snap – but one MoneySaver got a REAL shock when checking her smart meter.

Sainsbury’s Energy customer Janette McAdam, 59, found she’d apparently racked up a bill of more than £100,000 in just one day, and is used to her rogue smart meter regularly telling her she’s using £10,000s’ worth of electricity.

She’s been reassured it’s just a technical blip, and that she won’t be liable for the costs – but it’s still a pretty unnerving malfunction.

Your energy bill may not be six figures, but if you think you could be paying too much, use our free Cheap Energy Club to see if you can save £100s/yr. 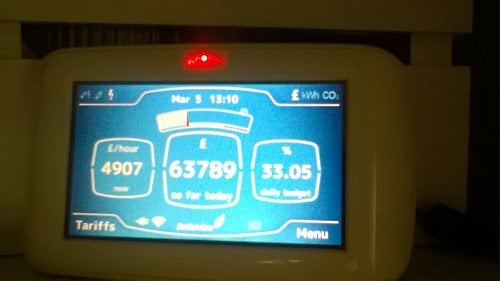 And a further picture from Wednesday 7 March shows that by the evening Janette’s bill ‘so far today’ had topped £100,000. In fact, the figure’s so large it can’t even fit on the screen: 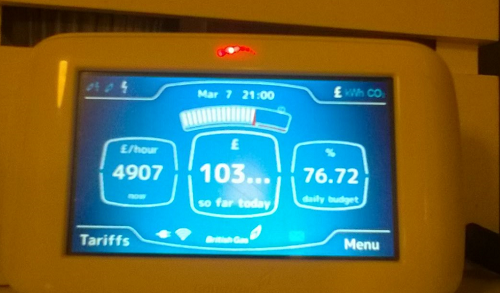 When we spoke to Janette last week, she told us she simply didn’t know. She said she’d had her smart meters changed after switching to Sainsbury’s Energy last year and was told that her new gas smart meter had a problem, but that it would be fixed.

She started noticing problems with her electricity smart meter, which is the one pictured, later.

She told us: “I noticed that there was a red light, which I don’t really look at very much.

“Every evening my smart meter can go up to over a hundred grand of electricity used.

We contacted Sainsbury’s Energy to find out what’s gone wrong, but it referred us to British Gas (Sainsbury’s Energy is a ‘white label’ of British Gas – in other words the same company but using a different brand). British Gas said it had a policy of not commenting to MoneySavingExpert on issues relating to “individual customers”.