New index shows household bills up 2.1% in past year

The UK’s biggest consumer website MoneySavingExpert.com is today launching a monthly Bills Tracker that will measure the rise and fall of the typical costs of running a home. The new index will use official data (1) supplied by the Office for National Statistics (ONS) to create a better picture of how the core expenses faced by families are changing, such as mortgage repayments, electricity, petrol, car insurance and council tax.

The first set of figures from MSE’s Bills Tracker show household costs increased by 2.1% in the 12 months to July 2017. While this is lower than the current headline rate of inflation (2) of 2.6%, the new data reveals that core household bills have been rising faster than other expenses - like food and clothing - for the majority of the past 18 months (3). 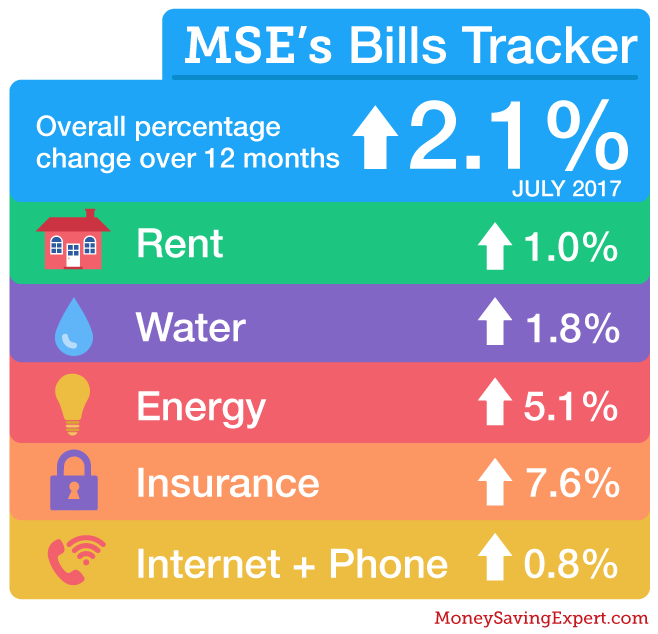 The MoneySavingExpert.com Bills Tracker only focuses on the unavoidable costs of living. It strips out items from the main inflation index – ones you’re unlikely to buy often if at all, such as 'rugs', 'door handles', a 'ten-pin bowling session' or 'knitting wool', leaving around 40 expenses you’re highly likely to face every month. In other words, this is a real bills index reflecting typical household costs.

Guy Anker, managing editor at MoneySavingExpert.com said: “What we’re seeing here is the biggest impact of inflation – on the pound in your pocket, the household expenses almost everyone has and the things you spend the most money on.

“It’s cold comfort for many, but there are things you can do to ease the pinch – the average home can save £300 a year by switching energy provider, you can tackle sky-high insurance costs with a quick comparison, and we know that many make huge savings by haggling with their broadband, phone and TV providers. Spending just a few hours on your outgoings can save hundreds, if not thousands, so it’s well worth doing as costs keep rising.”

What costs are covered by MSE's Bills Tracker?

(1) The ONS publishes different measures of inflation, and MSE has requested specific data to come up with a realistic figure for the average change in a typical household's core outgoings. Our figure uses elements of CPIH (the Consumer Prices Index including owner occupiers' housing costs).

(2) CPIH is the most comprehensive measure of inflation. It looks at the prices of a 'basket' of 700 goods and services listed in the Consumer Prices Index (CPI), such as clothes, food and furniture - and then adds in costs associated with owning a home, and council tax. 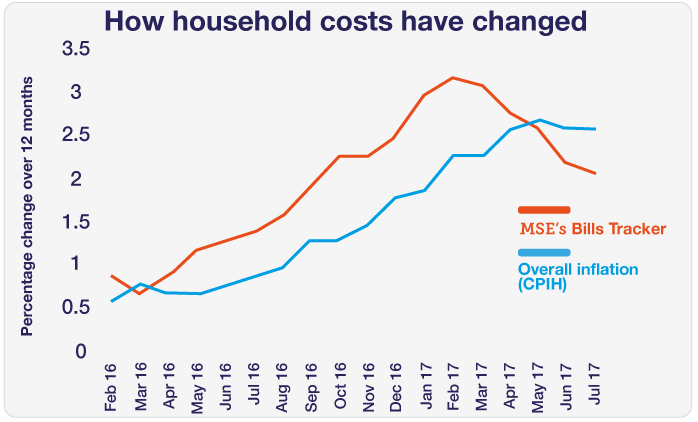 For more comments, interviews and the figures in full, please contact:

He’s the UK’s most-googled man, Citizens Advice’s Consumer Champion of the Year, and has spearheaded major financial justice campaigns including bank charges reclaiming (over seven million template letters downloaded), PPI reclaiming (over six million) and a successful large-scale campaign to get financial education in schools. He has his own prime-time ITV programme, The Martin Lewis Money Show, as well as a range of other regular media slots. He was appointed OBE in the Queen’s Birthday Honours in June 2014.

About MoneySavingExpert.com: MoneySavingExpert.com is dedicated to cutting consumers’ bills and fighting their corner. The free-to-use consumer finance help resource aims to show people how to save money on anything and everything, and campaigns for financial justice. It was set up in 2003 for just £100, and its free-to-use, ethical stance quickly made it the UK’s biggest independent money website, according to internet ranking site Alexa.com, and the number one ‘Business and Finance – Business Information’ site, according to Hitwise. It has more than 12 million people opted-in to receive the weekly MSE’s Money Tips email, and more than 16 million unique monthly site users who visit more than 28 million times a month. In September 2012, it joined the MoneySupermarket.com Group PLC.

For media requests, please contact:
press@moneysavingexpert.com
0203 846 2796
Non-media enquiries sent to this address WON'T be replied to.