Hundreds of BP customers to have £2,000 prize 'win' honoured after competition gaffe – but you need to claim it

Hundreds of BP customers have wrongly been given receipts showing they’d won reward points worth £2,000. BP initially said this was a glitch and refused to pay out, although it has since U-turned and will now honour prize wins. But you need to submit a claim to get the points – here's what you need to know.

MoneySavingExpert.com has been contacted by four BP customers - and seen a dozen complaints on Twitter - over the past couple of weeks from people complaining they'd been denied prize wins after buying petrol or other items at a BP garage. All of the customers say they received a receipt (see the picture below) telling them they'd won 400,000 BP reward points - worth £2,000 - as part of the firm's 'Fuel Your Year' promotion.

Those who managed to get in touch with BP were initially told this was a mistake and that they wouldn't receive the points - though some were offered 10,000 points worth £50 as a "goodwill gesture". But BP has now U-turned on this and says it will honour affected customers' prizes in full. It began notifying winners about this change in policy the same day MoneySavingExpert.com got in touch about the issue.

See our Cheap Petrol & Diesel guide for more on cutting your fuel costs. 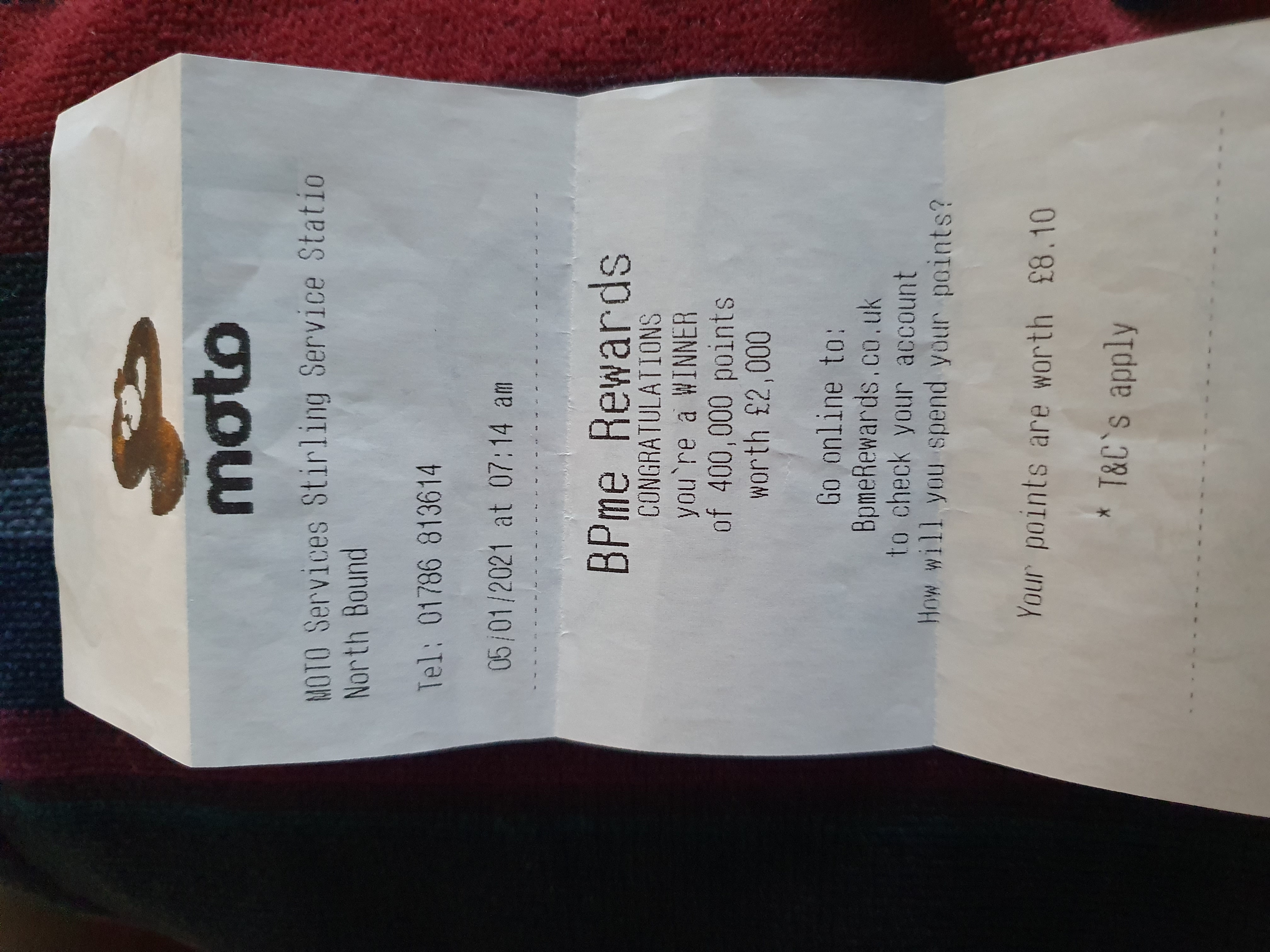 How does the competition work?

The BP Fuel Your Year promotion offers customers who swipe their BPMe rewards card or app while making a purchase in a BP store - which could be for fuel and for certain items sold in garages (lottery tickets and tobacco are excluded, for example) - the chance to win a daily prize draw worth 400,000 points.

The points are worth £2,000 and can be spent on fuel or other purchases at BP stations, as well as on purchases with BP's partner retailers, including Amazon and M&S, or donated to charity.

The promotion started on 5 January 2021 and is set to run until 2 March 2021, with one winner each day - so there were supposed to be 57 winners in total.

BP says "for a short time" on the first morning of the promotion, some customers were given receipts showing they had automatically won the prize rather than simply being entered into the draw.

Around 400 people have so far contacted BP after wrongly being told they'd won - though the actual number could be much higher as BP only knows the details of those who have already got in touch. We've seen reports of the error at forecourts as far apart as Watford and Stirling.

BP says the mistake was caused by a third party and that it was stopped as soon as it was detected. The promotion will still continue until March though, with one daily winner, despite its initial teething problems.

How to claim prizes if your receipt says you've won

Points won will be credited to your BPme account.

Helen Knapman, assistant news and investigations editor at MoneySavingExpert.com, said: "Motorists and other customers were rightly deflated when BP initially refused to pay out prize wins, although it's good to see it's now U-turned on this position.

"Crucially, you won't get the cash automatically if you haven't already complained though. So dig out old receipts from 5 January and if you've got a winner, get in touch with BP now - £2,000 in reward points is not to be sniffed at especially when they can be exchanged to spend at retailers, including Amazon and M&S."

What does BP say?

A BP spokesperson said: "Following an error in the setup of the BP Fuel Your Year promotion, a number of our BPme customers were wrongly informed that they had won the daily prize of 400,000 BPme loyalty points.

"Despite this being a mistake by a third-party supplier, BP will honour this prize for all the customers who have a receipt informing them that they were a winner."

Hundreds of BP customers to have £2,000 prize 'win' honoured after competition gaffe

Go to the MSE Forum