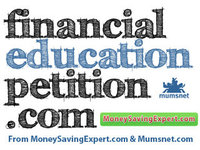 We are urging parents, and those who want to improve financial education standards, to use www.financialeducationpetition.com to send a robust message to those chomping to be the new prime minister to ensure the next generation isn't left in the financial mire.

With the two web giants commanding over 10m unique users a month combined, it's predicted 10,000s will sign, showing the wealth of feeling that this is too important to be allowed to drift into nothingness - and the parties need to reappraise their priorities.

In a recent poll of over 8,000 people on MoneySavingExpert.com, 97% supported financial education in schools, while 3% believed it is a job for parents (see poll results).

Why the petition is needed

Financial education was due to become a compulsory part of the curriculum in schools from September 2011 - as part of statutory Personal, Social, Health and Economic (PSHE) education - yet it was killed off in last-minute pre-election legislation jostling.

Shockingly, the reason it fell was nothing to do with financial education, but that the parties couldn't agree over the parental 'opt-out' of sex education, part of the same Bill.

Martin lewis, MoneySavingExpert.com creator, who helped launched the financial education plans with Children's Secretary Ed Balls, says: "We're a nation that educates our youth into debt when they go to university, but never educates them about debt.

"Yet the entire system was all about to change. Things were getting in place for compulsory financial education starting in September 2011 - the DCFS was nicely geared up, last month it even held a conference for teachers on how to teach it.

"Now it's been scuppered, yet financial education is an absolute necessity. Enough is enough, we're now calling on our future Prime Minster to confirm that, whatever happens, they won't ruin the work that's been done and leave financial education sitting in detention like a naughty school child."

Time for a change

Justine Roberts, creator of parenting site Mumsnet, says: "In an ideal world, children would get this kind of information from their parents, but that presupposes a good working financial knowledge in every home in the UK. Mumsnetters are a realistic bunch; they agree we need financial education to be taught in schools to make sure every child gets a good grounding in the basics."

Until now, whether a child receives financial education depends on whether their school decides to provide it as a voluntary measure under PSHE.

Chris Tapp from money education charity Credit Action, says: "For too long we've allowed our young people to set off into the complex world of personal finance without giving the education they need to cope. It's like we've been sending out people to drive without first giving them instruction and then being shocked when they crash.

"It's a no-brainer, everybody needs to manage money and use financial products wisely and I wholeheartedly support this call to the next government - whatever colour it may be - to ensure that giving every child the opportunity to learn about finance is of the upmost priority after the election."