A MoneySaver has told how she bought a whopping £60 of shopping for just £2.55, in one of the best examples we've seen of extreme grocery MoneySaving.

Lisa Parry's latest haul of 'whoopsie' yellow-sticker bargains from Asda - that's items which have been reduced to clear - included giant pancakes, an Extra Special quiche lorraine, fishcakes, beef burgers and pies. She's made similar savings at other supermarkets too.

The bargain hunter from Cardiff estimates the food will make her a week of breakfasts and lunches and two or three weeks of dinners – and she's credited her thrifty habit with having changed her life.

We've been talking about yellow-sticker discounts for years, but this is one of the best examples we've seen (though Lisa herself says she's bettered it in the past). Here's how she did it this time - see our Supermarket Shopping Tips guide for tips on how you can slash your grocery bills.

Watch Lisa's video to see what she got

Lisa, who's appeared on The Martin Lewis Money Show, showcased her £2.55 shop in a video which she tweeted to MoneySavingExpert.com founder Martin Lewis.

"It was amazing. I get such a buzz, it was really good and I am really proud of myself. I'll probably have to miss a week [of shopping] as my freezer is a chock-a-block."

Lisa, 43, who first started hitting the reduced aisle about four years ago, said: "It's the biggest thing that's changed my life, it has totally changed my life financially.

"I save so much money. I am saving money each month whereas before I did this I wasn't saving money and was struggling to make ends meet. I used to spend about £40 per week on shopping and now it's a few pounds."

Here's the receipt Lisa ended up with: 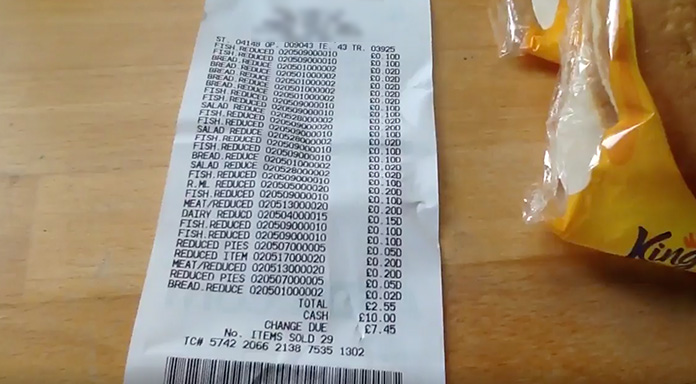 Lisa, who works full-time, told us her tips for bagging the best 'reduced to clear' bargains (you can see our tips plus lots more way to save on your groceries in our Cheap Supermarket Shopping Tips guide):

She added it's important people remember there will be items, such as chopped tomatoes or household essentials, that you can't get in the reduced aisle – but the overall savings mean she feels less guilty buying a few treats.

Lisa, who has become well known for bargain hunting at work, joked that colleagues even bring her in freebies. She said: "People know I love free stuff and bargains, I've got a bit of a reputation."