The best buy savings rates have barely risen since the Bank of England increased the base rate by 0.25 percentage points two weeks ago, MoneySavingExpert.com data reveals.

The official borrowing rate – which underpins savings and mortgage rates – rose from 0.5% to 0.75% on 2 August, but savers waiting for better returns on their cash have been left disappointed.

The best easy access rate hasn't moved at all, with only fixed savings best buys seeing a minuscule improvement.

While many banks increased the best buy rates before the base rate rise, perhaps in anticipation of it, hopes of an influx of great new rates since haven't materialised.

This is compounded by the fact virtually every bank has yet to pass on the full rise to existing customer rates.

Millions still languish on paltry sub 1% rates as banks take advantage of their loyalty when - despite the failure to increase rates - it is possible to earn well in excess of 1%. So if you're seeing poor returns on your cash, it's time to move account.

For the best savings rates currently on offer, including easy-access and fixed deals, see our Top Savings guide.

How have savings moved in the last two weeks?

It has got higher in the interim fortnight but those highs haven't lasted more than a few days. The graph below demonstrates this. 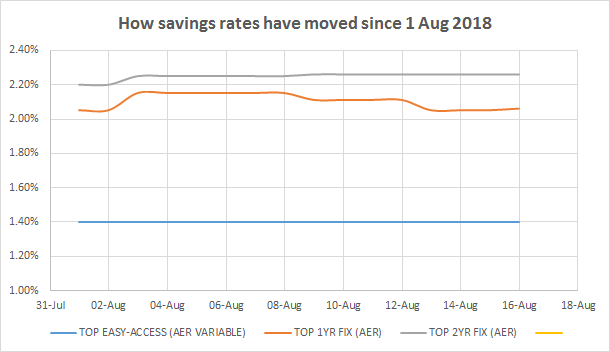 'It's time to ditch and switch to a better account'

Gary Caffell, money editor at MoneySavingExpert said: "While we did see a slight increase in rates before the base rate rise, many savers will be disappointed the best buy rates have been flat since. That said, the top picks are still pretty good compared with the dismal rates many savers are getting. So check your account and if yours is paying a paltry return, it’s time to ditch and switch your savings."

What are today's best buys?

According to our recent poll, 43% of you said you'd moved your account in the last year, meaning the majority are likely to be missing out on the best deals.

So if you do want to ditch and switch, the top easy-access deal right now is from Coventry BS. It pays 1.4% AER variable (including a fixed 0.25% bonus for 12 months). You can only make a maximum of three withdrawals a year to earn the headline rate of interest, so if you'd prefer more flexibility, Birmingham Midshires pays a lower 1.35% AER variable for a year. Both can be opened with £1. For info on these accounts and more, see our Top Savings Accounts guide.

Secure Trust Bank pays 2.26% for a two-year fix, while its three-year offering pays 2.37%. Both can be opened with a minimum of £1,000. You can fix for longer and earn up to 2.69%, though you'll miss out if rates rise in the future – so it's a risk. For more details, see Fixed Savings Accounts.