'My energy company got my refund wrong... then chased me with debt collectors because I owed 3p'

Energy firm First Utility has apologised after one of its former customers was pursued by debt collectors... for the grand total of 3p.

Chris Stephenson, 62, told MoneySavingExpert how she was repeatedly chased by debt recovery service Zinc for the tiny sum.

And the only reason she owed the amount in the first place was because First Utility incorrectly credited her after she sent final meter readings to them last summer.

Chris, from Sheffield, decided to switch her supplier last June because she was unhappy with First Utility's service, and sent final meter readings to the company.

She was judged to be in credit and was sent two cheques, which she cashed. But in August First Utility said one of these cheques was sent in error and asked her to repay it in instalments.

Chris did this, and thought she had made her final repayment in January - but then started being contacted by Zinc last month. After speaking to someone at Zinc on the phone, she was told she was being chased because she owed First Utility 3p.

After MoneySavingExpert contacted First Utility about the situation, it told us Chris's "final instalment was slightly short" of the balance she owed, which is why she was pursued.

But it has now apologised and agreed to offer a goodwill gesture of £55, as well as promising that Chris will no longer be contacted by the debt collectors and that there will be no impact on her credit score.

Despite having received an apology and the offer of a goodwill gesture, Chris says she's very unhappy with how First Utility dealt with the situation, and is considering taking her case to the Energy Ombudsman.

She said: "I feel like the situation stems from their error. I took images of my meter, and they sent me a cheque... it was for the value of around £150."

"They've told me that this won't affect my credit rating, but when I retire, I may want to move home - I don't want this legacy.

"Also, I've been offered £55 - that doesn't seem sufficient. They've wasted a lot of my time." 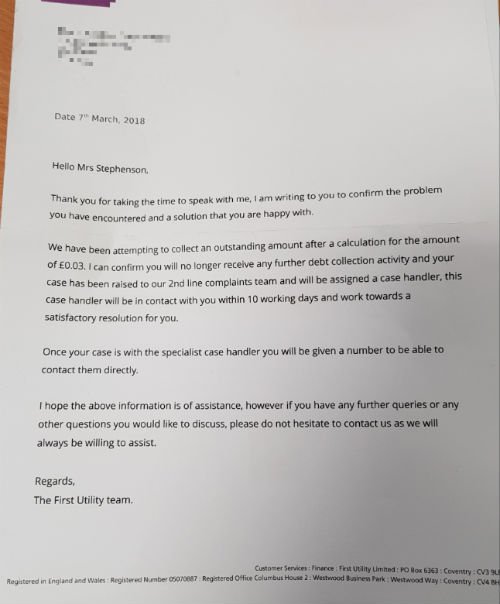 Can you REALLY be chased by debt collectors for just 3p?

While First Utility has apologised in this case, in part because it issued an incorrect refund initially, it was technically within its rights. Debt charity StepChange says that legally you can be pursued by a debt collector for any amount of money - even if it is as little as 3p.

In practice of course, this isn't common, because of the costs involved with pursuing debt. But DON'T assume that just because you owe a tiny amount it will necessarily be written off - and of course if you are referred to a debt collection agency, it could have an impact on your credit score.

If you're struggling with debt, see our Debt Help guide for what to do and who to ask for assistance.

What does First Utility say?

A spokesperson for First Utility told us: "We'd like to apologise to Mrs Stephenson for the problems she's encountered with her account and for any distress caused as a result.

"The issue with her account stems from us incorrectly issuing two refund cheques instead of one when she left supply in June 2017. When this was brought to our attention in August 2017, we apologised to Mrs Stephenson for the error and offered her the option to repay the second cheque in instalments.

"We agreed to this with Mrs Stephenson and she had been making payments to clear the balance. However her final instalment was slightly short of the total balance and this unfortunately resulted in a debt collection agency contacting her.

"We have written off the outstanding balance and offered her a gesture of goodwill. Mrs Stephenson can be assured that she will no longer be contacted by a debt collection agency and her credit history has not been affected."

'My energy company got my refund wrong... then chased me with debt collectors because I owed 3p'