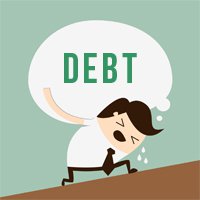 More than three million people in the UK fell behind on their household bills last year, according to new research from a leading debt charity.

Today's 'Behind on the basics' report compiled by StepChange, which provides free and independent debt advice, highlights the financial difficulties many in the UK are facing.

Data in the report revealed that two in five of the 350,000 people who received debt advice from StepChange in 2017 were in arrears on at least one of their household bills, with the charity estimating more than three million people across the UK failed to pay at least one of their key bills on time.

More than 30% of the charity's clients were in council tax arrears - by an average of £1,021 per person - with 23% of people who used its services falling behind on their water bills. For clients who paid rent, 21.5% were in arrears at least once in the year, while 20% of homeowners fell behind on their mortgage payments.

If you're struggling with debt, see our Debt help guide for more.

What else did the report show?

It highlighted how those struggling financially are paying for their bills, with 9.3 million people in 2017 using credit to meet a household need - such as their gas or electricity bill - with a worrying 1.4 million of this group resorting to 'high-cost' credit, such as payday loans.

On average, StepChange says its clients spend 60% of their monthly income on paying household bills, while this figure rises to a whopping 93% for those on the lowest incomes (under £10,000/yr). And with regards to savings, seven million households in the UK have less than £1,000 to fall back on, leaving little breathing space if personal circumstances change.

The charity puts these figures down to "a general squeeze on incomes, rising living costs, insecure work and regular income shocks".

What can I do if I'm struggling with debt?

Firstly, don't panic as no debt problem is unsolvable and there are steps you can take to get yourself back on your feet.

If you're paying credit credit card interest, see if you can shift it to 0% with a balance transfer. Do this and more of your repayments will go towards repaying the debt, not interest - cutting what you owe. If you're already using credit to fill gaps in your income, avoid a debt spiral by using our budget planner to help get your spending back on track.

If none of the above apply to you or you're still struggling, you can get free one-on-one debt-counselling help from Citizens Advice, StepChange, National Debtline or emotional and debt help from CAP. All are there to help, not judge.

What does StepChange say?

Peter Tutton, head of policy at StepChange, said: “Our findings, while worrying, help pinpoint three positive steps that could be taken to reduce arrears through better help for people to make ends meet, reducing the need for them to turn to unaffordable borrowing.

“First, the Government must ensure that the right kind of debt support framework is in place – especially in the design of the new debt breathing space scheme, but also in the way that deductions from benefits are applied. At the moment, these can have perverse consequences.

“Second, policymakers should make it a priority to increase households’ financial resilience through helping them to build savings, to help more people cope with the “new normal” of insecure income and regular income shocks.

“Finally, there is a huge opportunity for utilities providers, local authorities, landlords and other creditors to reflect on how they can create more flexible and personalised payment schedules for people whose incomes fluctuate. For example, higher payments in some months and lower payments in others could help people to work around foreseeable financial pinch points in the year –and potentially help them to keep up their agreed payments.”