Caught out by rebate firm Tax Credits Ltd pocketing half your cash? Here's all you need to know

Hundreds of people say they've been duped into using a third party claims firm called Tax Credits Ltd to request tax rebates, which then pocketed almost half their cash. Such sites are not scams, but many people say they weren't aware they'd signed legal documents giving the firm permission to look into both past and future claims. Here's what to do if you've been caught out.

MoneySavingExpert.com (MSE) has spoken to 11 users - and seen hundreds of complaints online - that allege a variety of problems, including that Tax Credits Ltd's adverts on social media sites deliberately mimic those of Her Majesty's Revenue and Customs (HMRC), that the firm submits claims using forged signatures, that it progresses claims without consent, and that it makes it difficult for people to get hold of their money.

Users are also angry that the firm takes 48% of any rebate due.

We've got everything you need to know on what to look out for below and what to do if you've been caught out but REMEMBER you can claim a tax rebate by yourself without the help of a third-party. You can also see our Copycat websites guide for more info on similar sites to avoid.

Tax rebate firms help submit tax repayment claims - for a fee - and will ask you to grant them permission to do so by signing a document or electronic form that gives them authority to reclaim tax for you.

But some of those we've spoken say their signature was used without permission or wasn't theirs at all.

In one case, HMRC was forced to apologise to one customer after the tax office said it wrongly "accepted a fraudulent" claim from Tax Credits Ltd. The apology came after the customer told HMRC that Tax Credits Ltd had submitted a claim using a signature that was not theirs.

HMRC revoked Tax Credits authority and gave the user a full refund. It also told the individual it would investigate the complaint and take action where needed.

If you think your signature has been forged, you should first complain to HMRC but it's not guaranteed HMRC will accept your complaint. We've detailed below what to do if HMRC does not uphold your complaint.

Here are some examples of people we have spoken to about the problems they say they've encountered with Tax Credits Ltd:

Catherine Wren, 44, from Bristol, told us: "I remember clicking on an advert on Facebook and I assumed it was associated with HMRC as it used the same branding and colours.

"I filled out an initial enquiry form to see if I would be due anything and didn't think anything else of it until I got a letter from HMRC. At no point did I sign any contract [see the image below for Catherine's driving licence signature versus the signature Tax Credits Ltd says she provided]. I called HMRC and was told I'd given this company authority to claim my rebate."

Catherine said HMRC initially told her it couldn't help as she'd signed documents allowing Tax Credits Ltd to claim on her behalf - something she denies. HMRC has now told us it is looking into the complaint.

'Emma did not consent to this'

Sukesh Verma, 41, told us his wife Emma Verma put her details onto Tax Credits Ltd's site and provided an e-signature, believing she was filling in an enquiry form to find out if she was eligible for a working-from-home tax rebate, unaware she was signing a legally binding document.

HMRC then got in touch to tell Emma she was due almost £3,000 and that Tax Credits Ltd would take 48%.

Sukesh said: "What I can't believe is that HMRC has sent years' worth of incredibly sensitive personal information across to this company. Emma did not consent to this, and the signature on the legal document we were sent (pictured below) looks nothing like Emma's." 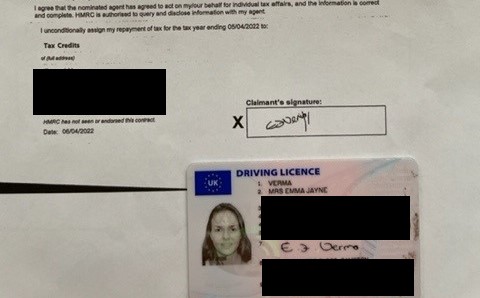 HMRC said it is looking into Emma's complaint.

Other complaints about Tax Credits Ltd

Here's a summary of some of the other complaints we've heard about Tax Credits Ltd:

MSE also has a number of concerns over Tax Credits Ltd's privacy policy in terms of how it handles users' personal data. Our concerns are that there is:

We've put these issues to Tax Credits Ltd. We also raised these concerns with the ICO, which told us it hadn't received complaints about the firm prior to MSE getting in touch but will now be contacting Tax Credits Ltd to discuss the concerns raised.

If you believe you've unknowingly signed up to use a tax rebate company, or you believe a firm has forged your signature, you can try the following complaints avenues - though it can be difficult to get all of your money back without incurring the claims fee unless you can prove you were misled.

If you need assistance with your complaint, you may be able to seek legal advice or help from charity Citizens Advice Bureau's consumer helpline.

Watch out for copycat websites - these need to make clear they aren't affiliated with the Government and will say this somewhere on their site. Also, check the URL, if it doesn't end in "gov.uk", it's not a Government body.

For further help, see the LITRG's guidance on how you can claim a tax rebate. You can also check our tax code calculator to see if you may be due any tax back.

What does HMRC say?

HMRC recently launched a consultation looking at ways to better protect taxpayers claiming tax refunds, as a "range of individuals and consumer interest groups have raised concerns that taxpayers are being charged excessive amounts, under terms which aren't clear".

Launched on 22 June, the consultation runs for 12 weeks and looks at introducing a number of new rules to help protect taxpayers including:

A spokesperson for HMRC added: "Customers should be careful when responding to online adverts. They should check who they are dealing with before they hand over personal information, and carefully read the repayment agent’s terms and conditions to understand what they’re signing up for and the fees they’ll pay.

"Where a customer has used a repayment agent and has an assignment [a legal agreement] in place, we take steps to ensure its validity and will investigate when we suspect a customer's signature is not genuine."