MoneySavers think the house price crash is over, according to a poll of this site's users.

Of the 9000+ readers surveyed, 71% reckon prices will either rise or hold still over the next year. On average, a 0.36% annual rise is expected.

It is the first time since property values started to fall in autumn 2007 that this site's regular house price poll has seen predicted growth (see the Free House Price Valuation guide).

The predicted increases echo some sentiment around the housing market that falling prices are a thing of the past, in the short term at least (see the 'House price crash is over' MSE News story).

Lender Halifax is expected to publish its index for August next week. It reported a 1.1% July rise (see the MSE News Halifax July price spike story).

In April, a similar poll revealed MoneySavers expected a drop of 3.68%, while in October last year, readers predicted a 10.7% fall.

The table below shows how attitudes have evolved. 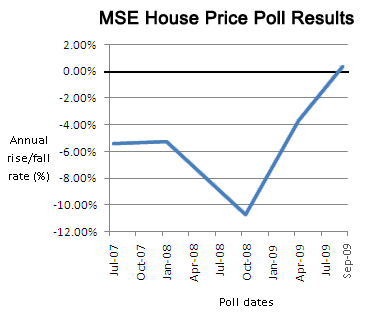 National Association of Estate Agents president Gary Smith says: "The housing market has finally bottomed out and indications are that we are hopefully moving to a point where the gradual recovery in prices witnessed this year will be sustained."

While estate agents and many property owners will celebrate price rises, it is not good news for first-time buyers or those looking to move to a larger home.

Nationwide says the price increases could end when interest rates finally rise. Currently, most commentators attribute the price hikes to a lack of housing supply.

The lender says many homeowners are better able to manage debts in the current low interest rate environment.

But when borrowing rates rocket from their 0.5% low, some may be forced to sell their homes and therefore increase housing supply which could force prices back down.

Martin Lewis, MoneySavingExpert.com creator, says: "The public's sentiment has an impact. If people believe prices will drop, this may be self-fulfilling.

"Those who believe in price plummets are far less likely to enter the market – this will cause a decrease in demand and push down prices.

"If they think they'll rise, they engage in the market and that, in turn, can push demand up. It'll be interesting to see how accurate these predictions are."