MoneySavingExpert.com has long campaigned to get compulsory financial education in schools. Well over 100,000 people have signed a government petition we started that calls for just that, which resulted in a debate in Parliament in December.

Below is Cameron's response (click on thumbnail for original letter or see letter typed out below). It will also be printed in The Sun tomorrow. 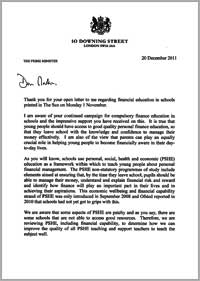 We originally received the response in December, but agreed with Number 10 it would be published in January, so it didn't get lost during Christmas.

Thank you for your open letter to me regarding financial education in schools printed in The Sun on Monday 1 November.

I am aware of your continued campaign for compulsory finance education in schools and the impressive support you have received on this. It is true that young people should have access to good quality personal finance education, so that they leave school with the knowledge and confidence to manage their money effectively.

I am also of the view that parents can play an equally crucial role in helping young people to become financially aware in their day-to-day lives.

As you will know, schools use personal, social, health and economic (PSHE) education as a framework within which to teach young people about personal financial management. The PSHE non-statutory programmes of study include elements aimed at ensuring that, by the time they leave school, pupils should be able to manage their money, understand and explain financial risk and reward and identify how finance will play an important part in their lives and in achieving their aspirations.

This economic wellbeing and financial capability strand of PSHE was only introduced in September 2008 and Ofsted reported in 2010 that schools had not yet got to grips with this.

We are aware that some aspects of PSHE are patchy and as you say, there are some schools that are not able to access good resources. Therefore, we are reviewing PSHE, including financial capability, to determine how we can improve the quality of all PSHE teaching and support teachers to teach the subject well.

I am sure you would agree that if pupils are to understand finance, it is important that they also have a good grasp of mathematics. We are also reviewing the National Curriculum to ensure that it sets out the essential knowledge that children should learn and that pupils get to grips with numeracy from the start of school. The review will also allow the Secretary of State for Education to consider whether financial education should become statutory as part of the basic curriculum.

We believe it is important that schools are given the freedom and space to provide a truly rounded education, including important things such as finance education. I hope you will support us with our work on the reviews, which will report next year, to improve financial education.

Our response to the letter

Thank you for taking this seriously. While schools may have freedom, they still prioritise what they're required to teach so financial education must be deemed a core skill. It's the cheapest way, long term, to prevent millions being screwed by scandals such as PPI, bank charges and endowments, to help people keep energy costs down and tackle our debt epidemic.

Last month, I had the joy of watching a Commons debate on the back of the petition signed by 100,000+ people, calling for compulsory financial education. Scores of MPs, many from your party, championed the idea (see the APPG on financial education's report).

Now, the word I dream of hearing you say is 'compulsory'. As you rightly say, maths is crucial, but financial education is a boon, not a burden to it. Embedding real financial numeracy within the maths basic curriculum would help boost maths' appeal to uninterested pupils. Then this could be coupled with teaching wider money issues such as 'how and when to borrow' within PSHE.

So far, your government's only commitment has been Schools Minister Nick Gibb saying: "It'll be looked at in the curriculum review." That's good, but please ensure this isn't political double-speak for being filed in the bin.