BT Sport: Is its 'free' offer any good? 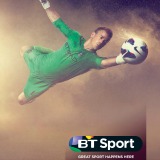 Football fans who want access to all next season's live Premier League matches should avoid locking into a long-term broadband contract just yet.

BT Sport, which will show 38 live games next season, launches in August and comes with no extra charge if you also take BT broadband and watch in standard definition (also see our Cheap Digital TVand Cheapest Football On TV guides).

Is it really free?

BT Sport isn't free as you have to pay for BT broadband. What's more, you pay an additional £3/month for HD, though this is waived if you sign up before 1 August.

Those with TV and broadband from Sky will be able to get the BT Sport channels for £15/month in HD or £12/month without, plus a one-off activation fee of £15.

If you have TV with Sky but broadband with BT, BT Sport is free.

We'll have full details of the packages available in July. If other providers react to BT's 'free' offer by then, we'll have details of those too. Sign up to our weekly email below for updates.

How do I get BT Sport?

BT's sports channel package, which also includes ESPN, will be available via BT TV, Sky and YouView (like Freeview, but with added extras).

What football will BT Sport show?

What's the cheapest way to get BT Sport?

If you want BT Sport, here are some examples of how much it will cost, though it's very likely there'll be more promo deals between now and August.

Important: BT TV looks and is much cheaper, largely because its basic package has far fewer channels than Sky's. So you need to weigh up the price against what channels you want.

You can't pay for BT Sport yet, though by signing up to a BT broadband and line rental contract, you'll automatically be opted in.

Here are examples of what it will cost customers in certain scenarios:

Martin Lewis, founder of MoneySavingExpert.com, said: "If you're a football fan who is likely to want BT Sport, don't lock yourself into a broadband deal just yet.

"BT has pumped serious cash into this new sports offering and needs to get it off the ground quickly. As always, that means launching it cheaply to build market share and a following.

"So for sports lovers and specifically football fans, while it doesn’t match up to Sky Sports' range, it looks to be a decent mid-way option.

"Of course, to call this 'free' is wrong, it's 'inclusive'. To get it, you need BT broadband and line rental, which if you pay for your line rental upfront for a year, can be as cheap as £20/mth.

"That's decent, though with other providers occasionally launching promo deals at £10/mth, without the sports channels, it's not market leading.

"Overall though, for those who want some football, for the moment, this is a pretty cost-effective way to do it."