Northern Rock mortgage customers with unsecured loans of between £25,000 and £30,000 may get redress for historical paperwork blunders if the decision of an appeal heard last month goes their way.

On 27 and 28 April, Northern Rock Asset Management (NRAM) – the state-owned remnant of failed lender Northern Rock – appealed against a judgment made by the High Court in December 2014 forcing it to pay redress to around 41,000 borrowers following errors in the way it documented unsecured loans.

The original dispute stemmed from Northern Rock breaching regulations by failing to disclose loan details on documents, rendering interest charges unenforceable. It was later discovered that customers also were incorrectly told that unsecured loan amounts between £25,000 and £30,000 were covered by the Consumer Credit Act 1974.

NRAM originally brought the case to the High Court itself to test whether customers with loans of between £25,000 and £30,000 were owed a refund after it received 277 customer complaints about the issue. At the time, it said it was "fully committed to acting in accordance with the law and treating both customers and the tax payer fairly".

The Court of Appeal's decision is expected in July. NRAM originally made a provision of £261 million for redress, but each month the case is ongoing, an extra £3 million of interest accrues. So, by the end of July, if the ruling goes in favour of customers, they can expect a share of around £282 million.

MoneySavingExpert.com asked NRAM what the average refund amount would be, but it says this depends on a number of factors.

In addition, the Court ordered NRAM to pay for a transcript of the hearing to be published on its website, which it has yet to do. It says it is still awaiting tapes from the court. Transcripts of court hearings aren't produced automatically, but the court made this request as it's in the public's interest.

See the Northern Rock told to refund 40,000 over incorrect loan documents MSE News story for more information on December's case and see MoneySavingExpert.com's Cheap personal loans and our Remortgage guide for the best deals for you.

So what happens next?

Now it's a case of waiting for the court to make its decision. In the meantime, accounts will operate in the normal way and NRAM says customers must continue to make their usual repayments.

If NRAM were to lose, it says that its "board would meet to consider the impact of the ruling", but that it would refund all interest payments made by consumers during the period of the breach.

NRAM adds that the redress due depends on the size of the loan, when it was taken out, when the account was paid off (if it has been), the date incorrect documentation was sent, and if any fees or charges were also paid by the customer.

If the court rules in NRAM's favour, it says customers will not need to do anything and their account will continue to operate as normal.

What was the High Court case about?

The appeal case relates to Northern Rock's 'Together Mortgage' taken out between 1999 and April 2008, which allowed customers to borrow up to 95% of the value of their home on a secured basis, as well as take out an unsecured loan of up to £30,000. It also covers some NRAM Lifetime Mortgage customers.

The letter below shows Northern Rock incorrectly stating that loans of up to £30,000 were covered by the CCA. 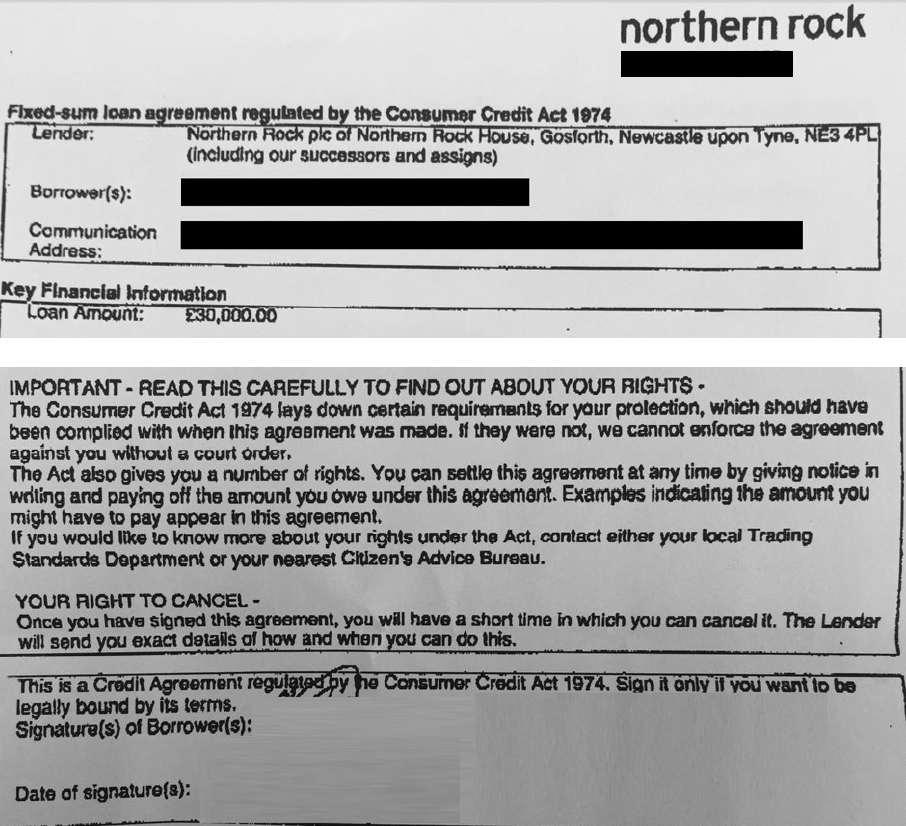 Borrowers with loans of less than £25,000 received redress between March and April 2013 in relation to the same paperwork blunder – see the Northern Rock pays £270m to 150,000 MSE News story.

At the time NRAM argued that as the CCA only applied to unsecured loans of up to £25,000 (despite mistakenly telling customers that loans of up to £30,000 were covered), redress should only be given to customers who borrowed £25,000 or less.

What about borrowers with loans of over £30k?

NRAM never sold loans of more than £30,000 as part of its Together Mortgage or Lifetime Mortgage products.