Brexit letter to PM: Consumers must be protected, say MSE, Which? and Citizens Advice

The Prime Minister has been urged not to let consumer rights "fall by the wayside" during the UK's negotiations to leave the EU, in a letter signed by MoneySavingExpert.com founder Martin Lewis and fellow consumer champions Which? and Citizens Advice.

Here's the letter in full: 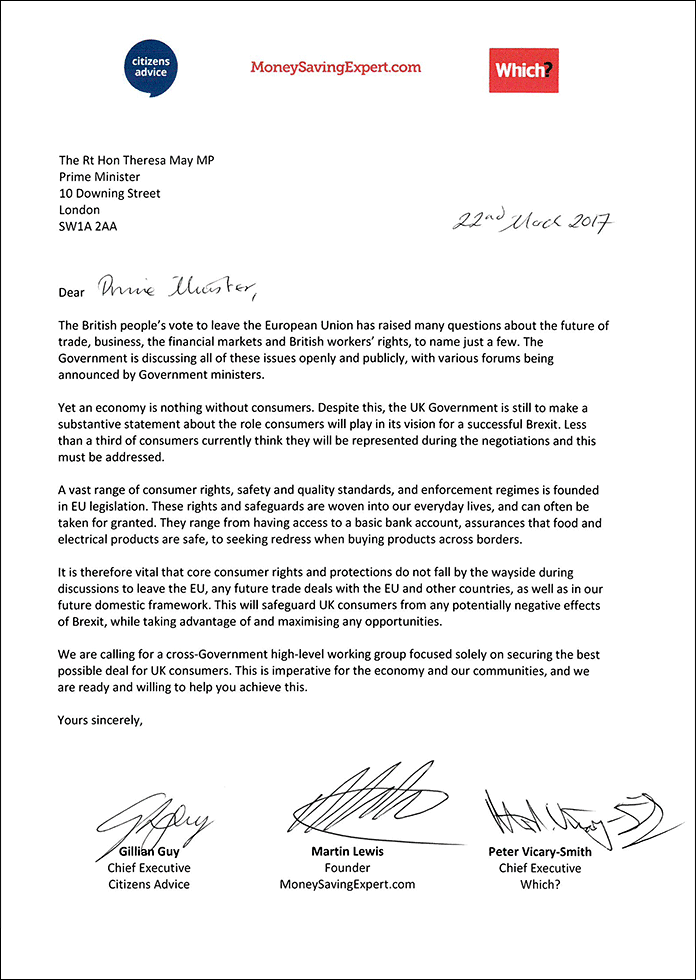 Here's the full text of the letter (in case the image above isn't clear):

The British people’s vote to leave the European Union has raised many questions about the future of trade, business, the financial markets and British workers’ rights, to name just a few. The Government is discussing all of these issues openly and publicly, with various forums being announced by Government ministers.

Yet an economy is nothing without consumers. Despite this, the UK Government is still to make a substantive statement about the role consumers will play in its vision for a successful Brexit. Less than a third of consumers currently think they will be represented during the negotiations and this must be addressed.

A vast range of consumer rights, safety and quality standards, and enforcement regimes is founded in EU legislation. These rights and safeguards are woven into our everyday lives, and can often be taken for granted. They range from having access to a basic bank account, assurances that food and electrical products are safe, to seeking redress when buying products across borders.

It is therefore vital that core consumer rights and protections do not fall by the wayside during discussions to leave the EU, any future trade deals with the EU and other countries, as well as in our future domestic framework. This will safeguard UK consumers from any potentially negative effects of Brexit, while taking advantage of and maximising any opportunities.

We are calling for a cross-Government high-level working group focused solely on securing the best possible deal for UK consumers. This is imperative for the economy and our communities, and we are ready and willing to help you achieve this.

Brexit letter to PM: Consumers must be protected, say MSE, Which? and Citizens Advice