The Bank of England has asked lenders to set aside £11.4 billion to protect against defaults, as consumer borrowing grew by more than 10% in the last year. It's said it'll also tighten affordability criteria for mortgage lending.

Figures show consumer credit grew by 10.3% in the year to April 2017, much faster than wage growth, and the Bank of England's warning is to ensure lenders can cope if more borrowers cannot keep up their repayments.

The total credit owed by UK consumers at the end of April 2017 was £198 billion, with credit card borrowing at a record £67.7 billion.

Worries about debt levels have been bubbling away for some time, and the Bank of England's demand for lenders to build a cash buffer shows it's worried that lenders won't cope easily if consumers start defaulting in large numbers.

What is the borrowing made up of?

According to the Bank of England's twice-yearly Financial Stability Report, consumers owed £198 billion. By comparison, the total amount of outstanding mortgage debt is £1.3 trillion, but consumer debt accounts for much greater losses. The Bank of England broke down the debt as follows:

Just £24 billion of the borrowing for car finance comes from banks. Many car finance loans come from other lenders, such as dedicated motor finance firms, which don't have to follow strict lending rules on having capital buffers to cover losses like banks do – a development the Bank of England is concerned about. 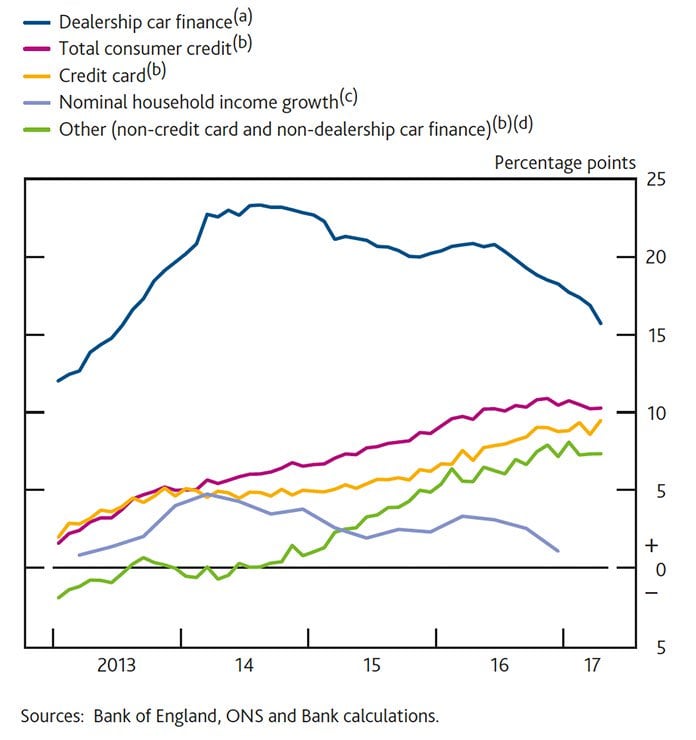 What will the Bank of England do next?

The Bank of England wants lenders to set aside £11.4 billion over the next 18 months so they're protected against defaults on unsecured consumer borrowing. Unsecured borrowing is when a borrower is lent money without putting up any collateral as security against the amount borrowed – unlike mortgage lending, known as secured lending, where the property itself is the security.

The Bank of England will bring forward the part of its annual 'stress tests' on banks that looks at their exposure to consumer credit. It said that at a time of increased consumer borrowing, when household incomes are falling, "vigilance is warranted", and that it will also look closely at two reports to be published in July.

At its next meeting the Bank of England's Financial Policy Committee will use the two reports to judge whether it needs to bring in any further rules for lenders regarding consumer credit.

What do the mortgage changes mean for consumers?

The Bank of England has recommended the rules around lending for mortgages are tightened to ensure banks are not overexposed. Lenders will have to check how potential borrowers would cope with a three percentage-point increase in a lender's standard variable rate (SVR), the rate borrowers move onto when a mortgage product deal ends.

Previously lenders had to ask borrowers how they would cope with a three percentage-point rise above the base rate, which at 0.25% is significantly lower than lenders' SVR rates. It's estimated that fewer than 0.5% of all mortgage approvals in 2016 wouldn't have met the criteria under the new rules.

What debt help is available?

Our Debt Problems guide has a checklist to help you sort your problems, and where to go to get free one-on-one debt counselling, such as from Citizens Advice, CAP, StepChange or National Debtline.

We also have a Debt-Free Wannabe forum board, which is full of inspiring stories and support, and our Mental Health & Debt guide.