A number of councils and businesses have continued to charge fees for credit card payments even after a new law outlawing the practice came into effect on Saturday, MoneySavingExpert.com can reveal – while other big brands have been wrongly warning customers they'll be charged.

Several MoneySavers have contacted us to say they've been charged to pay by card, with an airline, two councils, an energy company and a Glasgow-based cab firm among those still levying fees since Saturday.

If you're paying by card over the next few weeks, DON'T assume that shops and other firms have got the rules correct, and watch out for any extra charges. If you believe you've been wrongly charged to pay on plastic since the new rules came in, let us know at news@moneysavingexpert.com.

What are the new rules?

Since Saturday 13 January all surcharges for paying by credit or debit card have been banned – this includes payment methods linked to your card, such as PayPal or Apple Pay.

Companies CAN still charge you a booking or admin fee as long as it applies to other forms of payment, and you can still be charged if you use a business credit or business debit card. For full info see our Credit and debit card charges banned MSE News story.

Who's STILL charging to pay by card?

We've been told of a number of firms or other organisations that are still charging fees – here are some examples:

Neville, from Stockport, told us his local pizzeria was continuing to charge a card fee. He added: "This is even after showing them it is now illegal."

In other places credit card users have been wrongly warned they'll be charged fees – even though they haven't actually had to pay them.

The Student Loans Company had a message on its website on Monday saying it charged a surcharge for payments made on credit card, although a spokesperson later said this had been removed.

The website said: "There will be approximately a 1.5% surcharge added to payments made by credit cards."

One graduate told us: "As I live abroad I have to manually make payments to the SLC. I normally pay by debit card, so as to avoid the 1.5% surcharge, but I thought following the legislation change I might pay by credit card.

"When I tried, the site stated I would be charged an additional 1.5% for using the card, so I abandoned the payment and paid by debit instead."

A sign in a Premier Inn at London Euston also told customers that some cards, including Mastercard and Visa, would incur a processing fee. 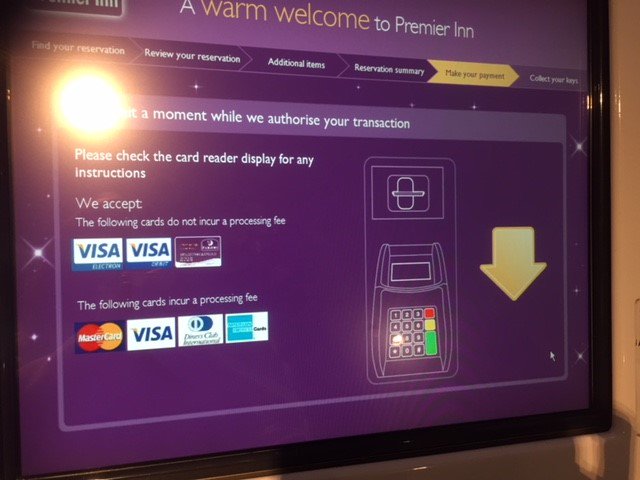 We approached Premier Inn for comment but haven't yet heard back.

I think I've been wrongly charged a fee – how can I challenge it?

If a company tries to charge you a fee simply because you are choosing to pay by card, you can refuse and complain to the company saying this is not allowed. Try showing it the official Government announcement about how the new rules work, and you can see full info in our Credit and debit card charges banned MSE News story.

If you're still having problems, you can report the company to Trading Standards – and let us know at news@moneysavingexpert.com as we'll be keeping close tabs on any firms that flout the rules.

Think you've been wrongly charged to pay on plastic? Let us know at news@moneysavingexpert.com.