EDF has apologised after hundreds of households were mistakenly sent letters by a debt collector demanding payment for outstanding bills.

Debt collection company Lowell Portfolio sent letters to 12,000 households in mid-April saying that it had been sold debt by EDF and was looking to arrange repayments - but MoneySavingExpert can reveal hundreds of these letters were sent out to the wrong people, some of whom were not EDF customers.

EDF says around 700 customers have already got in touch with it or Lowell to explain they do not owe the money stated on the letter, but more could be affected.

If you've received a letter from Lowell, DON'T ignore it. If you don't owe the money asked for in the letter, get in touch and let it know. If you do owe money ensure you respond - and get help if needed.

If you have been sent one of the letters by mistake, Lowell and EDF insist your credit report WON'T be affected, though you'll need to notify it of your error. We've also heard from one MoneySaver hit by the error who's received £100 in compensation.

See our Debt Problems guide for what to do and where to get help if you're having money problems.

Why has Lowell sent the letters out?

EDF sold the debts from several thousand customers' energy accounts to Lowell, meaning that Lowell is now responsible for recovering the money these customers owe.

But for some of these debts, EDF only knew that the occupier of the property was one of its customers - it didn't know their name. Therefore in order to collect the debt, Lowell had to try and identify the customers that were occupying the property in question at the time the relevant account was open.

Lowell says it believed it had identified the correct residents who owed money, using information such as credit reports - but it's admitted in a number of cases it got it wrong.

I've been sent one of these letters - what should I do?

That depends on whether you actually owe the money stated on the letter.

On the front of your letter, you will be told the time period and the property the debt relates to. Here's what you need to do:

Below is an example of one of the letters: 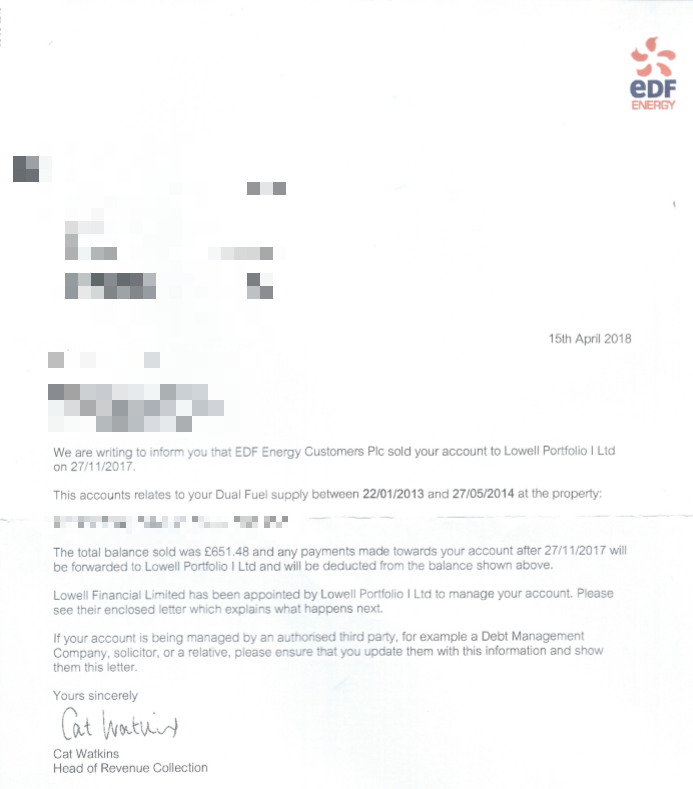 Am I entitled to compensation?

If you have suffered inconvenience, loss, or distress as a result of wrongly receiving a letter, Lowell says you may be eligible for compensation. It will decide whether to pay you anything on a case-by-case basis, depending on whether customers have a "genuine complaint".

If you have already contacted Lowell to say you don't owe any money, EDF says Lowell will be in touch, or will have already been in touch with you again to apologise, explain how the error happened and potentially offer compensation.

What do EDF and Lowell say?

An EDF Energy spokesperson told MoneySavingExpert the firm was aware a number of households had received a collection letter in error from Lowell and was "very sorry for any inconvenience or undue stress caused".

She added: "We are working with them to understand what led to this."

EDF said that credit scores won't be affected and that people who have already been in touch with it or Lowell will receive a letter from Lowell explaining what has happened and confirming the corrective action being taken, along with details of any compensation due. EDF says anyone else who has been affected by this can contact Lowell to receive an individual response.