The Duchess of Cornwall has praised credit unions after one London-based co-operative announced it will keep offering "affordable" payday loans following a pilot scheme.

Camilla, the Duchess of Cornwall and wife of Prince Charles, said it was "very important to raise awareness" about credit unions and the services they provide while visiting London Mutual Credit Union (LMCU) in Peckham, south-east London (see our Credit Unions guide).

LMCU is the latest in a number of credit unions the Duchess has visited in the past few years.

A spokesperson for Clarence House says: "She is considering becoming a member of a credit union because she has often chosen to support organisations and charities that offer practical help in their communities.

"She has been very impressed by the practical nature of the help that these institutions offer in these difficult economic times". 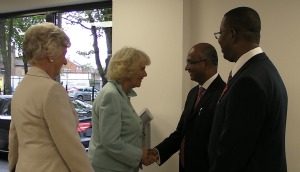 Her visit coincided with LMCU announcing it will continue to offer an alternative to traditional payday loans by offering short-term borrowing with an interest rate of 26.8% APR. Other payday lenders charge up to 4,000% APR.

Often, the sting in the tail from payday lenders comes from late payment fees – many horror stories have been reported of borrowers being charged hundreds of pounds in additional fees, sometimes dwarfing the original loan amount.

But those taking out a payday loan with LMCU can also choose to pay off their loan over one, two or three months, and there are no additional charges for late or early repayments.

The Duchess's home at Clarence House means she would be eligible to join LMCU, which offers financial services to anyone who lives or works in the London boroughs of Southwark, Lambeth, Westminster or Camden.

It was the first British credit union to offer payday loans when it introduced them in February last year, and has offered to share its findings with other credit unions so more consumers can access an alternative to the high-interest options on the high street.

What are credit unions?

Credit unions are small non-profit financial organisations set up by members with something in common to benefit their community. There are roughly 500 unions in the UK offering loans, savings and in some cases, current accounts to members.

Often they provide an alternative for those who can't access ordinary bank products or credit elsewhere. But as they are underpublicised, many are unaware of what they do.