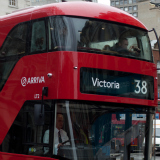 London's bus and Tube fares will rise by 3.1% on average next month, but some travellers will be hit by hikes of up to 4.3%, Transport for London has announced.

The average rise will be pegged back to July's retail prices index (RPI) rate of inflation, but a six-zone annual Travelcard – which allows travel on almost all the capital's public transport network – will be rising 4.3% to £2,320. (Our Cheap Train Tickets guide has tips to save money across the country.)

On the buses, the pay-as-you-go fare on Oyster and contactless payment card increases 5p to £1.45.

Most Oyster pay-as-you-go fares for the Tube, DLR and London Overground will be frozen at 2013 prices next year, but some fares in zones 1 and 2 will increase by 10p.

Passengers who use paper one-day Travelcards should consider switching to Oyster, as off-peak tickets will now only be available in six-zone versions. So someone who buys a two-zone paper Travelcard for £7.30 now will have to pay £8.90 for the six-zone version next year – but they can cut this cost to £7 by using Oyster.

If you regularly travel on London's public transport, here are ways to cut your costs.

The 3.1% overall increase is equal to the July 2013 RPI inflation rate, which determines mainline rail fares.

London Mayor Boris Johnson has, on average, frozen the London fares in real terms. But the hike in Travelcard costs is because they cover both National Rail and TfL services. Mainline fares are due to go up by an average of RPI plus 1%, making it a 4.1% overall average rise.

Johnson says: "I have always said I was determined to bear down on fares, while ensuring that we can still invest properly in a transport system that is critical to our city's success.

"I know that families and working Londoners who have helped drive the economic recovery still face real pressure over the cost of living and so I've decided to keep fares in line with RPI and therefore freeze them in real terms for next year."

Manuel Cortes, general secretary of the TSSA rail union, says: "We welcome the news that fares will not be rising again above inflation in January but we want to see an end to annual inflation rises altogether. We have the highest fares in Europe and it is high time they were frozen."