Household bills and expenses are continuing to rise at the same pace as last month, despite a dip in overall inflation, this month's MSE Bills Tracker shows.

Average overall costs are up 2% over the 12 months to December 2017, the same as November's 12-month figure. This compares with a 0.1% drop in the headline CPIH inflation figure – more on which is below – between November and December.

Our tracker, which launched in August 2017, uses data supplied by the Office for National Statistics (ONS) to create a picture of the average price changes for household bills across the UK.

Inflation is usually measured by looking at the prices of hundreds of different items, but crucially our tracker cuts most of these out and focuses only on core expenses such as housing costs, energy and insurance – expenses which most households have and which typically make up the lion's share of outgoings.

Here are some of the main figures – you can see a more detailed breakdown below: 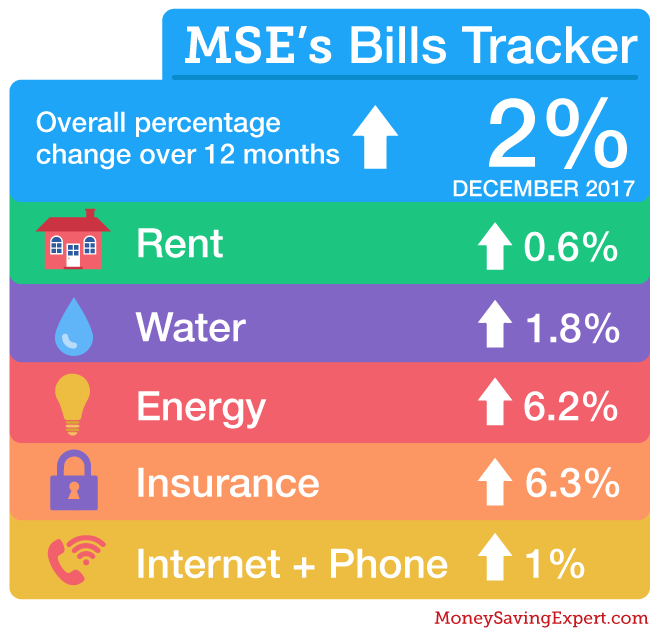 How does MSE's Bills Tracker work?

Inflation is the rate at which the cost of goods and services bought by households rises or falls. The ONS publishes different measures of inflation, and we've requested specific data to come up with a realistic figure for the average change in a typical household's core outgoings.

Our figure uses elements of CPIH, which stands for the Consumer Prices Index including owner occupiers' Housing costs, the most comprehensive measure of inflation. CPIH looks at the prices of a 'basket' of 700 goods and services listed in the Consumer Prices Index inflation measure, such as clothes, food and furniture – and then adds costs associated with owning or renting a home.

Crucially, MSE's Bills Tracker cuts down the CPIH basket of goods and services to about 40 costs which many typical households are likely to face every month (see the list below).

We've focused on bills rather than expenses such as food, and stripped out items included in the CPIH that you're unlikely to buy often, if at all, such as rugs, door handles, a ten-pin bowling session and knitting wool. In other words, this is designed to be a real bills index reflecting typical household costs.

The MSE Bills Tracker shows that overall household bills and expenses were up 2% over the 12 months to December, the same rise as the same period to November. 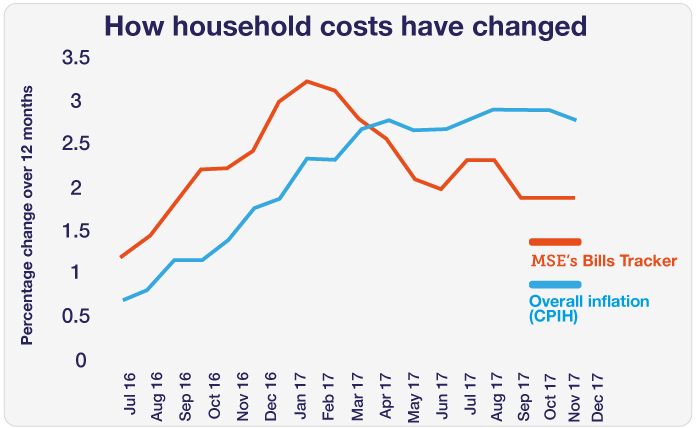 How the cost of different bills changed in December

Here's a list of what's included in MSE's Bills Tracker, and how these costs have changed according to the most recent set of figures:

How can I use this info to save money?

The idea behind MSE's Bills Tracker is to give a more accurate picture of how most households' bills and expenses are changing. Our hope is that it will help MoneySavers in two ways.