TSB has apologised after it cancelled some former customers' direct debits and mistakenly told the firms they were paying that they had died, MoneySavingExpert can reveal.

Several former TSB customers who've switched away from the bank following its IT meltdown have this week reported receiving letters from various organisations including United Utilities, the RAC and local councils saying they are sorry to hear of their passing. The letters also say that their direct debits have been cancelled.

Confused by the correspondence, customers have then got in contact with those who have sent them the letters, and been informed that TSB has told them they have died.

TSB told MoneySavingExpert "a small number" of customers switching or closing their account had been affected and said it was "deeply sorry". One of the affected customers told us he has been offered £250 in compensation.

We've heard from several TSB customers who have switched away from the bank since the start of its IT problems using the Current Account Switch Service (CASS).

The switches appear to have gone through. However if you switch via CASS you're supposed to have your outgoing payments including direct debits switched across to your new bank - and those we've heard from have said this hasn't happened.

Below is the letter one of the customers was sent from United Utilities: 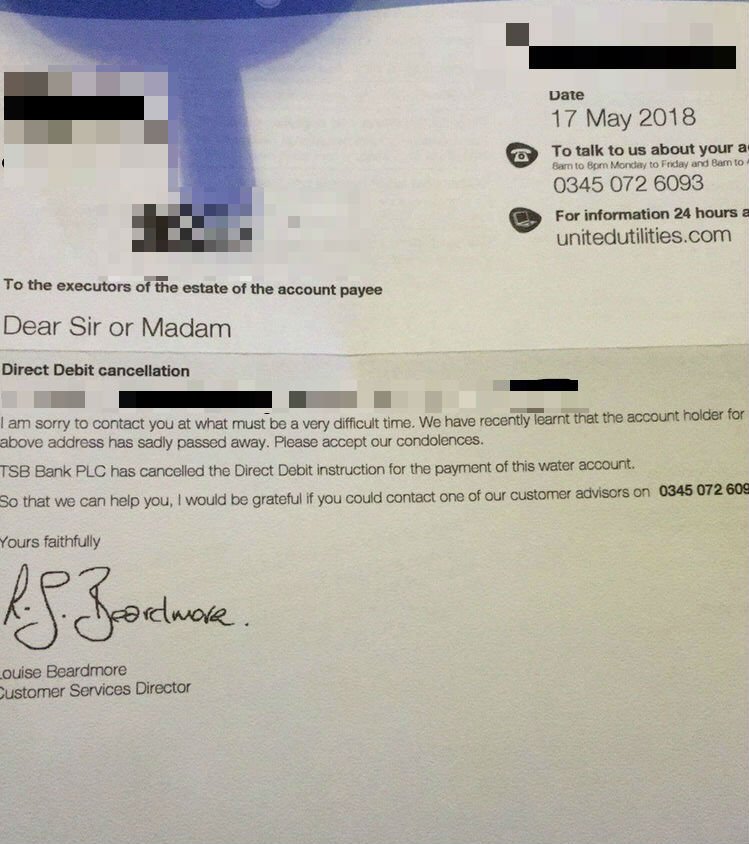 What should happen when you switch using CASS?

CASS was launched in 2013 to simplify the process of switching between banks. Here's how it's supposed to work when you switch bank:

A spokesperson for CASS said: “We can confirm that the Current Account Switch Service continues to operate as normal and at no time has the service been unavailable to customers wishing to switch their current account.

"Bacs and the CASS participant community are working closely with TSB to complete the impacted switches, and we would also remind anyone using the service that they are protected by the Current Account Switch Guarantee in the event of an error with their switch."

If you do experience a problem after switching your bank account using CASS, you should typically contact the bank you have switched to, not TSB.

Steve Nowottny, news and features editor at MoneySavingExpert, said: “This is just the latest bizarre twist in the TSB tale, as the fallout from its massive IT meltdown continues. Even ex-customers who’ve decided to switch away and bank elsewhere seem to still be experiencing problems.”

“TSB needs to urgently get to the bottom of what’s gone wrong here, and fix it. It must also be transparent about exactly how many customers have had direct debits cancelled when switching – and ensure anyone affected is appropriately compensated.”

A TSB spokesperson said: “We are aware there was an issue with a small number of our customers switching from or closing their account with TSB, which resulted in an error in the cancellation or transfer of some of their direct debits.

"We are deeply sorry for any distress caused. We are working to rectify this issue and we are really sorry for the inconvenience caused."