Fraudsters claiming to work at MoneySavingExpert.com have been cold calling people as part of a new PPI scam – so we decided to take them on, turning the tables by giving them a call.

We've recently had multiple reports of fraudsters calling "from Martin Lewis's MoneySavingExpert" about a promised PPI reclaim of £1,000s in return for a £150 "admin fee".

These, of course, are bogus calls. MoneySavingExpert never, ever, EVER cold calls people or knocks on doors for any reason. We've championed reclaiming PPI for free. But after we were passed one of these con artists' phone numbers, we gave them a call…

What happened when we called back...

After our reporter rang the number and said he had a missed call, the man who answered opened by saying: "I'm calling you from the MoneySavingExpert – you've received a call from my colleagues regarding your PPI."

When our reporter asked if this was the MoneySavingExpert associated with Martin Lewis, the call handler replied by saying "exactly" – little did he know that the person he was speaking to was calling from MSE Towers and sat just metres from Martin's office.

Our reporter – who is aged 24 and has never had a mortgage, credit card or any other loan – was told that there was a PPI reclaim cheque waiting for him for £4,689... even though our reporter never even gave his name.

There was, of course, a catch. Our reporter was told there would be a £150 "admin fee" to process the reclaim, which would supposedly only be taken after the cheque had cleared.

Once the scammer had made his pitch, our reporter confronted him, and revealed that he was actually calling from MoneySavingExpert. The fraudster quickly changed his tune and claimed he was actually ringing from a different firm, which we haven't been able to trace but which we've chosen not to name here in case he was pretending to be from another legitimate company.

The fraudster also claimed he was calling from Shepherds Studios on Charecroft Way in Shepherd's Bush, London. Funnily enough, MoneySavingExpert used to be based on Charecroft Way in Shepherd's Bush, though not for five years. When we visited the address last week to check, there was no sign of the fraudster or the firm he claimed to be calling from, though there are many entirely legitimate firms based there.

You can read the full transcript of the call at the bottom of this article.

Martin: 'The UK is in the midst of an epidemic of scams and frauds'

Martin Lewis, MoneySavingExpert.com founder, said: "The UK is in the midst of an epidemic of scams and frauds. As a simple rule, be incredibly wary of anyone calling you, texting you, emailing you or knocking on your door, trying to sell you a product or service that you haven't requested. Personally I wouldn't touch them with a bargepole.

"Worse still, what leaves a bile-like taste is the fact that many of these scammers are using the reputation and trust MoneySavingExpert and I have spent years building up, to try to rob vulnerable people. You will never be cold called in any way by MoneySavingExpert to sell you a product or service – we're a journalists' website, we don't do that.

"And as I've said many times before, and am currently suing Facebook over, I don't do ads. Any advert you see with my face in it is nowt to do with me, and often a scam. Don't touch it, don't sniff it, don't go near it."

For more on the fake ads being used to try to leech off Martin's and MoneySavingExpert's reputations as trusted sources – and what to do if you spot one – see our Fake Martin Lewis ads guide. 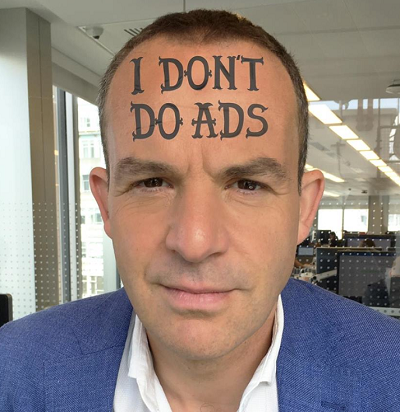 Martin doesn't do ads, as he has made clear here.

What we're doing to track down the scammers

We've now reported the call to Action Fraud and the Financial Conduct Authority.

A spokesperson for Action Fraud said: "This type of contact is designed to convince you to hand over valuable personal details or your money.

"Don't assume anyone who has contacted you is who they say they are. If an email, phone call or text message asks you to make a payment, log in to an online account or offers you a deal, be cautious and report it to Action Fraud online or call 0300 123 2040."

Unfortunately, we haven't been able to trace the call ourselves – all we have is the phone number, which is likely rerouted and regularly changed. But we will continue to investigate this and do whatever we can to trace those responsible.

If you've been contacted by a scammer, please let us know as soon as possible at  news@moneysavingexpert.com.

This isn't the first time we've tried to call back PPI scammers – we've phoned a couple of other numbers that MoneySavers have given us after experiencing similar calls from scammers claiming to work at MSE. Yet it's the first time we've managed to get through and find out exactly what they're telling people.

In 2011, Martin launched a successful lawsuit against 'Money Claiming Experts', a claims-handling company that cold called people – it lost a High Court battle for infringing the 'Money Saving Expert' trademark.


'I've had PPI, but I know I wouldn't be contacted like that'

We've heard from nine different users in the past few weeks who've been contacted by scammers claiming to be from MoneySavingExpert, all following a similar pattern – in each case, the caller offered the victim a PPI payout, usually to the tune of £4,000-£5,000.

Here are some of the reports we've had:

The Site and Martin Martin Lewis