Get 65% off package holidays 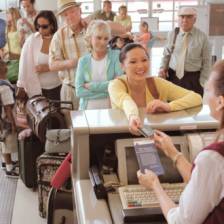 Holidaymakers could save up to a whopping 65% on last-minute deals as tour operators struggle to shift their summer packages following a turbulent year.

The Association of British Travel Agents says it expects more last-minute summer holiday booking this year than ever – with 650,000 still reportedly set to book – because numerous factors have led to passengers delaying their plans (see the Cheap package holidays guide).

As a result, travel firms have thousands of unsold holidays they need to shift, which could lead to hundreds of pounds of savings for holidaymakers.

It's usually best to plump for a package if you're going for seven, 10 or 14 nights to a traditional package holiday destination, such as the Balearic or Greek islands.

The table below shows some of the massive package discounts we found:

You could still save even more by following a few MoneySaving tips (see the Cheap package holidays guide).

Once you've found a package holiday, note down flight times, hotel details and whatever else is included.

Then go online to find a list of tour operators that sell holidays to the same destination. Then ring them to haggle.

Using this technique, MSE today blagged an extra £200 off a seven night August holiday to Crete.

TUI travel, the group that owns travel firm Thomson, saw revenue drop by 4% in the last three months, with end of year profits expected to be lower than predicted.

TUI chief executive Peter Long says: "The strong booking trends experienced up until the volcanic ash disruption in mid-April and the subsequent rebound in early May were not sustained throughout the early summer period.

The other travel giant Thomas Cook would not comment on its financial performance or prices.

Get 65% off package holidays