MoneySavingExpert.com is calling for UK customers to get the same compensation as US consumers, now American iPad and iPhone users whose kids ran up huge bills making in-app games purchases could be refunded. We've reported on a spate of UK incidents, including kids who ran up a £3,200 bill.

Apple could end up giving back $100 million (£66 million) after a case where five US parents complained the giant failed to provide adequate security to prevent their children from spending their cash.

Sometimes, users can make a purchase in a game without even entering a password, if it has been recently entered. On other occasions, kids simply remember their parents' password, which is the only security hurdle to overcome to make a purchase.

These games are often free to download but the true horror can come later. Only today, we were tweeted by @jandz, who said: "My nine-year-old spent over £600 on app purchases for a zoo in September. They are refusing to refund anything."

Twitter user @Nikki_UpNorf also tweeted us today saying her daughter was offered a 'Mountain of Gems' for £69.99 as part of an app she was playing. See the image below. 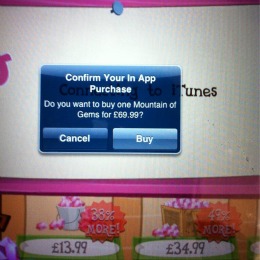 Martin Lewis, MoneySavingExpert.com creator, says: "The fact that games and apps targeted at children pump out in-app tariffs to 'feed farm animals' that can add up to thousands of pounds in a few hours is simply irresponsible.

"While of course, parents need to share the burden for supervising their kids — part of the problem is many kids are more tech-savvy than their parents, picking up passwords as they sit on mum or dad's knee.

"And while adults think the kids are harmlessly playing a game, that can turn into a cost nightmare. Many are simply flabbergasted, as they never assume giants such as Apple and Google would allow such rampant profiteering aimed at their kids.

"Apple especially makes a play of only allowing approved apps in its store. So why does it allow games that can be targeted at young children to charge such ridiculous amounts for in-app purchases?

"Now consumers in the US look likely to get a fair system which sees the big companies shouldering some of the burden. UK consumers should be given the same protection."

Precise details of the refunds in the US are vague because of Apple's silence on the matter, but reports state court papers suggest it agreed to the settlement last week, though it must still be approved by a Californian judge.

The court documents say most customers, about 23 million, will get a $5 refund in iTunes credits, as the value of the charges is low.

However, those who were charged $30 or more will get cash, though the exact amount is unclear.

As things stand in the UK, unless a user's mobile operator refunds the costs as a gesture of goodwill, customers are stuck.

Depending on your phone make and/or model, there are a number of precautions you can take to limit your chance of being a big hit with a big bill: